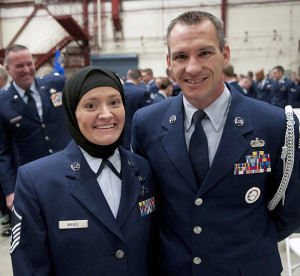 Laura Magee remembers asking her father about religion when she was 8 while innocently combing her hair in front of a large vanity mirror.

It was the first time she can remember asking one of her parents about the existence of a God — which she said her father quickly repudiated. Her parents identified as agnostic or atheist, she said. For Laura, now a master sergeant in the Nevada Air National Guard, these sorts of questions lingered and often went unanswered, even as she attended Christian services in adulthood.

Three years ago, though, after 12 years in military intelligence, she entered a new military career field as a chaplain assistant.

During her training at Fort Jackson, S.C., her questions turned to affirmation in something she admittedly knew very little about.

That’s where she says she discovered Islam and eventually introduced the religion to her husband, Mark Magee, when she returned home.

A rare change of faith
It’s extremely rare for someone to enter the six-week military chaplain course and leave professing a different faith than the one they practiced beforehand, said Capt. Rafael Lantigua, a Muslim chaplain with the 502nd Air Base Wing at Joint Base San Antonio, Texas.

“I have never heard of that happening before,” said Lantigua, a mentor for Laura who attended chaplain school the same time she was at the chaplain assistant’s course. “I’ve heard of chaplain assistants coming out of school saying they have a broader understanding, more religiously competent, with more appreciation (of other religions), but when you are talking about changing faiths, having that transition take place — a life changing event such as that — I’ve never heard of that happening before.”

Chaplains have provided spiritual guidance for members of the U.S. military since the creation of the Continental Army in 1775. The modern mission statement, according to the Air Force Chaplain Corps website, is to provide “pastoral care ministry to those of faith and those of no faith.” But chaplains are encouraged to publicly proclaim a religion, as long as it doesn’t hinder their responsibilities providing spiritual guidance to military members of all backgrounds.

During the six-week training, chaplains and chaplain assistants enter different courses, but often mingle in a classroom setting.

“I had learned little bits and pieces of it (Islam) through documentaries or my world religions class (in college),” she said. “But to me, in the past, I thought, well, all religions have a certain amount of truth to them and Islam was kind of an eastern religion that I really didn’t understand.”

Lantigua — the son of a Catholic father and Southern Baptist mother — converted to Islam when he was a teenager. During their training in 2014, he gave a short presentation on Islam. Afterward, Laura and other service members approached him for more information.

“I definitely see a rise in interest (in Islam) because the U.S. military has been engaged with the Muslim world, if you will, the Middle East, at least in the American consciousness for decades,” Lantigua said. “For people outside the military, they want to ask, but are too afraid to offend. In the military, they are more comfortable to engage with other military because we both wear the uniform.”

Lantigua gave Laura an English translation of the Quran and they met frequently during the course to discuss passages from the text.

“From the quality of the questions she was asking, I could tell she was having a rediscovery of her own personal beliefs,” he said.

As the course came to an end, Magee told her husband, Mark, about this rediscovery, which he said “shocked” him at first.

Coming home
“At first she messaged me and told me, ‘Hey what do you think if I told you I was reading the Quran?’” said Mark, a master sergeant in the Nevada Air National Guard. “It was quite a shock.

“It was different when she got home and explained the whole thing and explained what it was and how she felt. … Her biggest thing was the worship of Jesus as God,” he said. “That was the sticking point. She felt that people were worshipping Jesus as God, when it should be just God.”

Mark engaged the situation with an open mind and read the entire Quran twice.

“The things that are there, versus reading the Bible and the many contradictions between the Old and New Testament — the Quran is more constant all the way through,” he said.

Mark admits that’s tough for many people to understand. He’s even stopped trying to convince several family members of why he converted.

“You can see that some people aren’t happy, but it’s my walk, not theirs,” he said.

As for Laura, the conversion has stymied her relationship with her father, who since professing apathy toward organized religion when she was a young child, has remarried and entered the Christian faith, she said.

“The arguments (with my father) just got so bad,” she said.

“Other than family struggles, it’s been really easy,” Mark said. “There have been a lot of supportive people. Every once in a while, somebody will make a joke about it. But to me … I have a really strong back, I guess. It doesn’t bother me.”

Both Mark and Laura initially worried how their fellow Airmen in the Nevada ANG would react to their conversion.
“It’s been really positive,” Laura said.

Finding acceptance
“Amazingly positive, actually. When I get questions, the two I get most are: ‘How did you come to Islam?’ Not necessarily in a judgmental way, but a curious way. The other question I get is, ‘How are people treating you? Are you being treated OK?’ Because everyone is worried about Islamophobia and worried I’ll be treated in a bad way. There’s more of a fear of me being treated badly … it’s kind of touching.”

The Nevada ANG’s pursuit of diversity and inclusion in the workplace goes beyond Laura’s case, having claimed four of the five Excellence in Diversity awards at the 2016 National Guard Diversity Training and Workshop last summer in Norman, Oklahoma. The Nevada ANG also hosted the Joint Diversity Executive Council conference at the Eldorado Resort and Casino ballroom, Jan. 11-13. Representatives from more than 20 states and territories attended the conference.

According to Pentagon data released in 2015, more than 5,000 Muslims serve in the U.S. military.

Along with the positive reception among their fellow Airmen in the Nevada ANG, both said the Northern Nevada Muslim Center Mosque in Sparks has welcomed them with open arms.

“(Members of the local Muslim community) have all been really nice,” Mark said. “When I first went there with my kids, [at the Mosque]. It felt weird. It took two times going there. … They eventually started asking questions and soon welcomed us. They were so nice about the whole thing. They were curious about us and the situation.”

Sherif Elfass, the NNMC President and University of Nevada, Reno professor, was one of the first people to greet Mark and Laura at the Mosque.

“We understand conversion is not an easy step,” Elfass said. “We have a support group for them. That is something the Mosque provides. Not classes, per se, but we do assign a person to take care of their needs.”

When Laura asked if Elfass would speak at the Nevada ANG in Reno, he did.

“I was supposed to go there and talk about what Islam is,” he said. “Obviously, the discussion turned to [the Islamic State of Iraq and Syria] and what I think about them.”

Being in the military, Laura says many people she works with feel her new religion and its practices helped bring about radical groups — specifically ISIS — in the same region the U.S. military is actively engaged.

ISIS, designated as a terrorist organization by the United Nations, seeks to build its caliphate, or religious state, with goals of waging holy war against “disbelievers.”

Laura feels the portrayal of Islam in news reports and on social media has led to great misconceptions about the religion, largely because of ISIS.

Laura said she feels, on some levels, it’s recently become more personal for her because ISIS has not only declared war on the West, but also the religion she now practices.

Mark agreed and equated ISIS to the Ku Klux Klan of Islam.

“Technically, I wouldn’t call them Muslims,” he said.

Elfass agreed. “They hijacked the religion,” he said.

Laura said her spiritual journey, from questioning her father about the existence of God to discovering Islam at chaplain school, has presented her with more than a religion, but also a desire to be an active voice for the Muslim community — taking a stand against the radical elements of the religion.

“For the most part, people don’t care if you are in the Chaplain Corps as a Jew, a Christian, a Muslim or a Buddhist,” she said. “They don’t make a big deal of your religion. But because of the nature of things today and how negative the outlook is on Islam right now, there is sort of a need for a Muslim presence in the Chaplain Corps.”

Laura recently appeared on “The Stream” — an Al Jazeera network show — titled “Muslim in the Military.” She was granted permission to wear her hijab at work while in her Air Force uniform, which was quickly endorsed by her chain of command, Magee said. She also writes a blog on her conversion experience titled, “For the Love of Deen” (Deen is an Arabic word meaning “religion”).