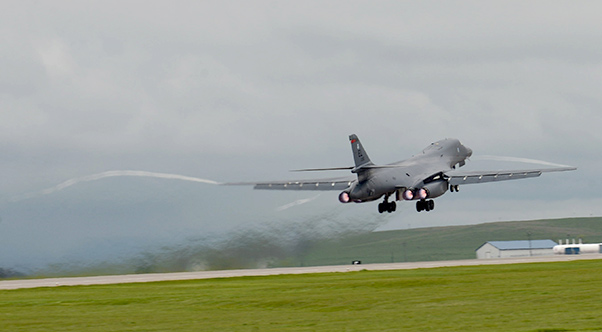 A B-1 bomber takes off as a part of the Combat Hammer exercise at Ellsworth Air Force Base, S.D., May 10, 2017. The exercise produced valuable data to combatant command planners and holistically tests the systems, procedures, and Airmen from the initial mission planning to find the final weapon employment phases.

Two B-1Bs from Ellsworth Air Force Base, S.D., deployed 30 inert precision-guided bombs, cluster bomb units, and decoys during a weapons system evaluation May 8 to 11 at the Utah Test and Training Range, Nev.

Aircrew from the 34th Bomb Squadron and maintainers from the 28th Aircraft Maintenance Squadron participated in the Combat Hammer, the air-to-ground Weapons System Evaluation Program, to validate B-1 operational capabilities.

“In this exercise, we tested the B-1 capabilities to ensure the parameters of weapons are met,” said Maj. Nathan White, lead evaluator for Combat Hammer and assistant director of operations for the 86th Fighter Weapons Squadron at Eglin AFB, Fla.

White explained Combat Hammer is responsible for the evaluation and assessment of precision-guided munitions and air-to-ground weapons to ensure they are reliable, maintainable, suitable, and accurate.  The WSEP program is owned and managed by the 53rd Wing also headquartered at Eglin.

“The combatant commanders around the world have contingency plans built on certain weapons’ capabilities,” White continued. “We evaluate that the capabilities are accurate to the plans that they are building it on.”

Ellsworth aircrews conducted test operations over the Utah Test and Training Range, an area operated by Hill AFB, Utah, where there were more than 500 participants involved. 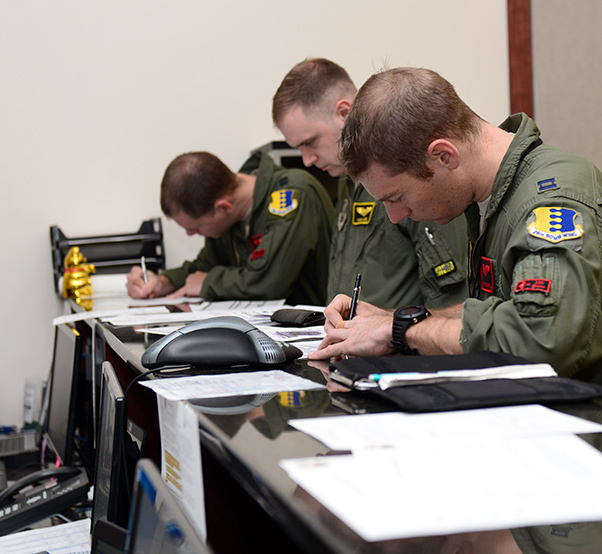 Pilots and weapon systems officers assigned to the 34th and 37th Bomb Squadrons, attend a step brief during the Combat Hammer exercise at Ellsworth Air Force Base, S.D., May 10, 2017. Combat Hammer is designed to assess and evaluate the reliability, maintainability, suitability and accuracy of precision-guided air-to-ground munitions.

“We used a mix of GBU-31s, 38s and 54s as well as CBU-103s and 105s for a total of 30 bombs deployed in the exercise as well as 16 ALE-50 decoys,” White said. “We take operational jets that have capable combat mission-ready aircrews, and we create realistic environments where we can evaluate the overall performance of the deployed weapons.”

Strategic deterrence is vitally important to both the nation’s defense, and its allies. With the visceral action of the strategic weapons tests provided by B-1 aircrews and maintainers, Ellsworth was not only able to demonstrate its capability and readiness, but trained Airmen in the process.
“In exercises like this, munitions and maintainers get practice generating these aircraft and ordnances that they don’t usually get to see, like loading GPS and high-tech ground munitions,” said Staff Sgt. Brian Dunn, weapons evaluator assigned to the 86th FWS.

Dunn explained that the training mostly focused on the aircrews and weapons Airmen, most of whom haven’t deployed or never before worked on a CBU-103 or 105.

“It’s good training for everyone,” Dunn said. “It [encompasses everything] from storage to impact. Everyone’s job is important all the way up the chain.”

The B-1 bomber is a fundamental part of the Air Force’s combat airpower, and keeping the lethal piece of machinery combat-ready is vital in taking the fight across the globe.

With a strong, credible B-1 force, Ellsworth Airmen uphold a high state of readiness and proficiency – validating the global strike capability. 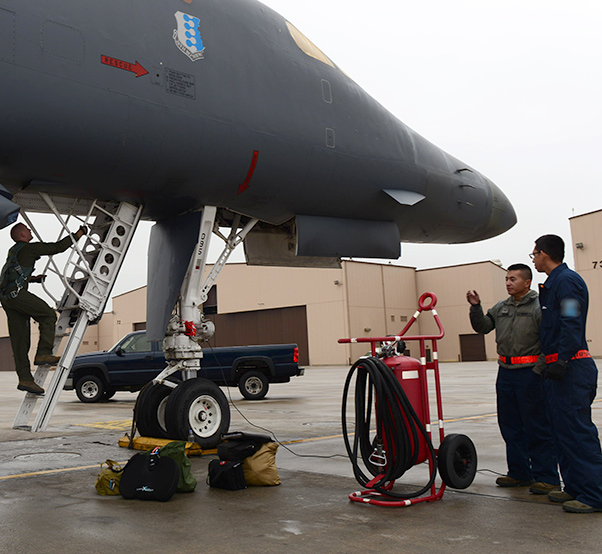 Capt. Dillen Stuhlsatz, a weapon systems officer assigned to the 34th Bomb Squadron, enters a B-1 bomber during the Combat Hammer exercise at Ellsworth Air Force Base, S.D., May 10, 2017. With a strong, credible B-1 force, Ellsworth aircrews and maintainers maintain a high state of readiness and proficiency, validating what Airmen bring to the fight – immediate global reach.