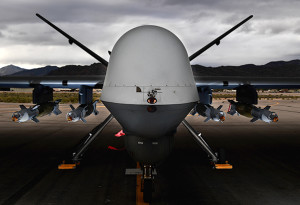 As many Americans sleep soundly in their beds, Airmen in attack squadrons across the 432nd Wing at Creech Air Force Base, Nev., flying the MQ-1 Predator and MQ-9 Reaper from cockpits in the continental U.S. are having decisive effects in the fight against violent extremism.

In combat operations, last week, one MQ-9 squadron, in particular, stood above the rest when aircrews employed 13 Hellfire missiles and 500-pound bombs during one eight-hour overnight shift.

These employments occurred in two different combat arenas separated by thousands of miles, while the aircrew piloting the aircraft sat, just feet away from one another, in separate cockpits in the squadron.

Over the course of the night, the MQ-9 aircrew employed four different variants of Hellfire missiles and two variants of the 500-pound bombs in close-air support while simultaneously executing over 30 hours of armed reconnaissance and producing critical intelligence for our national defense.

“While this was one night in one squadron, this kind of impact is happening daily in the attack squadrons flying in combat across the enterprise,” said Col. Case Cunningham, 432nd Wing commander.

In 2016 alone, this particular squadron, flew nearly 25,000 combat hours and 1,300 combat sorties, culminating in 520 weapon strikes in support of combatant commanders.  The squadron continues the pace, today, with nearly 300 strikes in 2017 alone.

“This was amazing work by one of several highly professional and combat seasoned MQ-9 squadrons we have in the 432nd Operations Group,” said Col Joe, 432nd OG commander. “These crews are providing combatant commanders the entire ‘Find, Fix, Track, Target, Engage, and Assess’ target cycle in a single platform.”

Providing this persistent attack and reconnaissance capability 24/7/365 days a year is no easy task.

“We are absolutely evolving the aspect of modern warfare and proving the capability of MQ-9s in every mission we fly and it’s amazing to watch the work of these professional aviators up close,” said Joe.

In addition to skilled aircrew, the MQ-9 enterprise takes hard work and dedication from multiple squadron, maintenance, intelligence and communications personnel to operate as the well-oiled machine it is today.

“Achieving this level of execution is not solely on the pilots and sensor operators; they are backed by a highly capable and professional team of intelligence analysts, support personnel and contractors, all dedicated to executing the squadron mission,” said Lt. Col. Albert, 432nd WG squadron commander. “We would not be able to fly airplanes, if it were not for their collective hard work and selfless attitudes.”

Despite the contributions of these Airmen, providing this capability doesn’t come without its own challenges. The squadron is only able to achieve these effects by focusing on balancing work and personal life.

“Being deployed in place make this a particular challenge,” said Albert.  “We deliberately set our culture around excellence in combat as well as taking care of our families and having fun while we do it.”

The commander elaborated on how important it was to find the middle ground for the greater good of the Airmen and the missions assigned to the unit.

“This balance will enable us to, not only, excel in our current mission, but also helps us to create the next generation of well-balanced leaders for the MQ-9 community and the Air Force.”

The wing focuses on winning today’s fight while also deliberately developing its Airmen with the leadership and expertise they’ll need to continue being combat leaders in tomorrow’s fight.

“It’s truly humbling to work with Airmen who make such an impressive impact in the fight every single day,” said Cunningham.