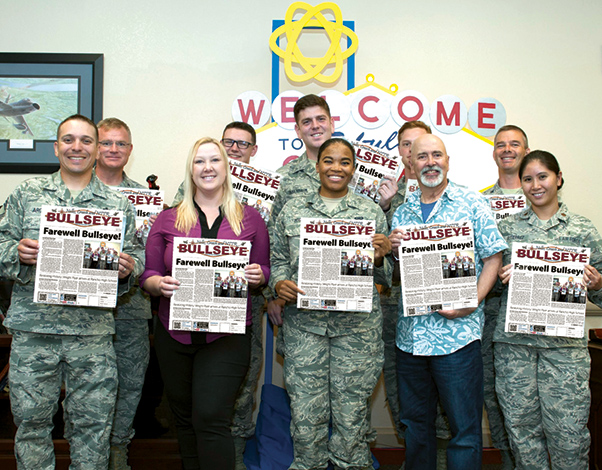 Leadership from the 99th Air Base Wing and members of the 99th ABW Public Affairs office pose for a photo with the last printed edition of the Bullseye. The public affairs office has produced the Bullseye newspaper for close to 66 years and is moving toward an all-digital format to help revitalize the story telling formats.

NELLIS AIR FORCE BASE, Nev. — The 99th Air Base Wing Public Affairs office has documented and produced the missions of Nellis and Creech Air Force Bases and the Nevada Test and Training Range for nearly 66 years.

The base paper documented history, stories, photographs and memories for more than half a century weekly or bi-weekly since July 7, 1951. That era is coming to an end this week.

This is the last issue of the Nellis Bullseye.

More than a decade ago, the Air Force stopped producing base papers on base and started utilizing contractors. Now, with social media and the .mil websites, many bases have moved toward digital production only.

The public affairs office will continue to produce articles and photos for the website, however the physical print will be comprised of content from multiple bases through Aerotech News, contractor, which has published the Bullseye for Nellis and Creech.

“As the Air Force places more focus on revitalizing the squadron, we at 99th Air Base Wing Public Affairs also want to shift focus to telling the Nellis Airman’s story at the squadron operations level,” said Lea Greene, 99th ABW Public Affairs officer. “Not being tied to a print deadline allows time for operations stories to develop further and go farther.”

Beyond the local printed paper, the public affairs office uses many other formats with greater flexibility through community engagement, the Nellis AFB website, DOD websites, social media and civilian media, she added.

The Nellis website [www.nellis.af.mil/] generates over one million hits a month which spikes to nearly 2.5 million during exercises and events such as Red Flag and Aviation Nation. Nellis AFB official social media posts on Facebook, Twitter, Instagram and YouTube have an audience reach averaging over 800,000 per day.

“Our Airmen do incredible things every day, and it is an honor when they trust us to tell their story to the world,” said Greene.

For more information on submitting articles and story ideas, contact the 99th Air Base Wing Public Affairs office at 702-652-2750.