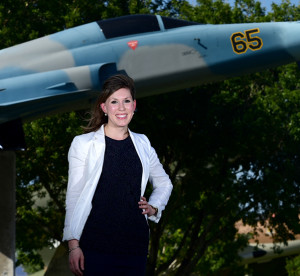 Behind every good Airman is a great support system. Meredith, a key spouse of the 17th Attack Squadron, not only cares for her husband, an MQ-9 Reaper pilot, but also works for spouses married to military members across Creech and Nellis Air Force Bases, Nev.

She serves as an In Gear Career Nevada chapter lead and Las Vegas community volunteer, while balancing her day job as a policy director for an education policy non-profit organization in the Nevada school district, all of which earned her recognition in 2016.

Meredith’s schedule wasn’t always this hectic and she recalls a time when her husband, Daniel, was training to become a pilot where she found herself unemployed despite the many applications she submitted.

“The first Air Force welcome event I went to had great resources for some things, but there was no discussion about employment,” she said. “I asked for advice in pursuing a career as a military spouse. The first answer I received was ‘the faster you realize you won’t have a career the better.’ The next answer was ‘this is as much your journey as it is his.’”

This motivated her and when her husband was stationed at Beale Air Force Base, Calif., she began contacting elected officials in the area for an internship in education policy, a topic she has been passionate about since high school while she pursued a graduate degree.

“I took the first internship, I was offered,” she said. “I worked on the education portfolio full-time for four months. The day I submitted my final thesis I was offered a full-time job, but it was with healthcare.”

She took the job and, two years later, was appointed the marketing and outreach director for a healthcare and education non-profit organization. A few years later, her husband would be assigned to the 17th Attack Squadron at Creech AFB and she was forced to make the decision to stay in Sacramento and keep her job, or leave her job to be with him.

“I, ultimately, decided to leave my job which was really sad, but at that time in our lives, it was the right decision for our family,” she said.
Upon arriving to Creech, she began getting involved in the key spouse program to help care for families of the 17th ATKS.

Some of her work in the squadron included rolling out a welcome program for new squadron members and their families, leading the squadron’s family day event which brought families together to learn about their military spouse’s mission and making 30 meals for six families in times of need.

As a result of all her work in the squadron she was awarded the 432nd Wing Key Spouse of the Year for 2016.

In Air Force Chief of Staff Gen. David L. Goldfein’s message of his three focus areas, he highlighted squadron personnel including civilian leaders as having the most profound and lasting impact on Airmen and their families.

“We believe in the Chief’s vision and, as leaders, we talk about doing right by our Airmen, our families, and our mission,” said John. “Expanding that focus to include our families is decisive because while we recruit individuals, we retain families.”

Helping support the squadron wasn’t enough for Meredith, she also finds time to provide support for Creech and Nellis AFBs.

She created groups for spouses to network for employment, advocated to voice retention issues and identified military family concerns to national policy makers.

Meredith was recognized with the Nellis/Creech/NTTR Key Spouse Excellence award for 2016.

During her work assisting spouses with employment, she began working with other spouses in the Las Vegas area and labored through networking barriers. Her motivating conviction was that military spouses shouldn’t have such a difficult time finding work. It was, at this time, she started the Nevada chapter for In Gear Career, a program that can be found through the Spouses Education and Career Opportunities platform established by the Department of Defense.

The SECO program offers services like In Gear Career which provides education and career guidance to military spouses.

“Our vision is to improve the quality of life, morale and stability of military families by enabling military spouses to seek and obtain meaningful employment alongside their service members,” Meredith said. “Research indicates that approximately 80 percent of jobs come from relationships. It is difficult to establish relationships and robust professional networks as military spouses, but it can be done.”

Meredith, along with others within the chapter, are building collection of contacts in various sectors of the business community. When a military spouse seeks help for employment in a particular industry, programs like In Gear Career can help connect them to resources in that sector with the goal of obtaining an occupation or maintaining a career.

She said being able to reach out to a network of people can help spouses, new in the area, while providing the business sector with an under tapped pool of human talent.

“The Creech community and our squadron are so supportive of their families that the climate and culture fuels my intrinsic desire to volunteer,” she said. “I don’t want people to feel isolated. Being a military family means that we experience many of life’s major stressors on an ongoing basis and I really have a desire to be a part of ensuring families have a community of support to help them in all components of their lives.”

While building that support for military spouses, Meredith also finds time to get out in the local community volunteering for the Junior League of Las Vegas and helping to organize charity programs for 12 high schools across the district.

For these efforts and more, she was awarded the Presidential Volunteer Service Awards in 2016.

“I’m so proud Meredith has identified and developed the support network of like-minded, ambitious and career-driven women that was missing from our Air Force life,” her husband said. “The exciting part is the ground-breaking scope of her vision and the enormous impact it has.”

For more information on the key spouse program, contact the nearest Airmen and Family Readiness Center.