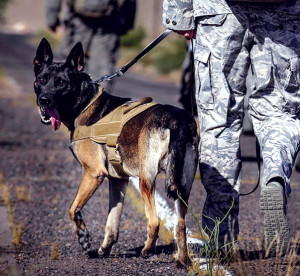 A 99th Security Forces Squadron K-9 handler and his dog participate in a ruck march during National Police Week on Nellis Air Force Base, Nev., May 16. The annual National Police Week was held from May 15 to 19 to honor fallen law enforcement officers and recognizing those who serve today.

NELLIS AIR FORCE BASE, Nev. — The annual National Police Week was held from May 15 to 19 to honor fallen law enforcement officers and recognizing those who serve today.

Defenders from the 99th and 799th Security Forces Squadrons, along with local law enforcement used the week to come together in a series of events to commemorate the week.

“Police week is a week to remember any fallen law enforcement officers throughout the country,” said Tech. Sgt. Brandon Miller 99th SFS assistant NCO in charge of investigations. “We’re focusing on two of our fallen Defenders, and any local law enforcement in the area that lost officers.”

Throughout the week, Defenders and local law enforcement alike participated in a variety of events at Nellis and Creech AFB, including:
• Ruck March: The march raised canned food for the community and also remembered fallen Airmen by reading their stories.
• Defenders Challenge: An obstacle course held on Creech AFB
• Pistol Competition: Defenders were able to show off their shooting ability
• Golf tournament: Defenders and local law officers combined to compete at the Sunrise Vista Golf Course.

“To me it gives Airmen a chance to reflect on what we do day in and day out,” said Miller. “A lot of times, people just come to work and see it as any old day. Sometimes, Airmen don’t realize that at any time they are putting their lives on the line because anything can happen during a routine traffic stop or a domestic case.”

Police week at Nellis was capstoned with a ceremony during reveille as SFS folded the flag and paid homage to those lost.

National Police Week was created in 1962 be President John F. Kennedy in order to not only honor those who gave their lives in the line of duty, but also serve as a week to look back on the job they perform.

“Events like this are important because it reminds us of the sacrifice we may have to make and the sacrifices those who’ve passed on have made,” ” said Senior Airman Brandon Miles, 23d Security Forces Squadron unit training manager, Moody Air Force Base, Georgia.