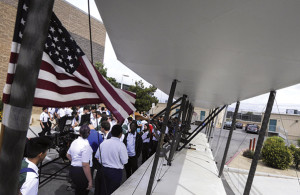 Aviation students from Rancho High School gather around the USU Wright Flyer after it was unloaded at Rancho High School, North Las Vegas, May 15. The flyer is one of six existing scale models of the Wright Brothers’ original aircraft.

NELLIS AIR FORCE BASE, Nev. — On Dec. 17, 1903, four miles south of Kitty Hawk, North Carolina, Orville and Wilbur Wright achieved a title that many of the time sought after: first in flight.

On May 15, 2017, the USU Wright Flyer, an exact replica of the 1905 plane flown by the Wright Brothers, arrived at Rancho High School, North Las Vegas, for aviation students to learn from reassembling and preparing the aircraft for its appearance in the base’s Aviation Nation air show and open house in November.

Once the Air Force Association Thunderbird chapter found out there was a possibility of obtaining a flyer for Rancho High School, they contacted the non-profit in Ohio where the aircraft resided. AFA Thunderbird Chapter Rancho aviation academy teacher. After expressing our interest in the flyer, the AFA worked out a deal with the group and delivered it to Rancho High School, said Bob Hale.

The exact replica of the Wright Brother’s aircraft was then transported in pieces to Rancho High School where the students will make repairs and assemble the flyer to its original form.

“The flyer needs some cosmetic work and minor repairs to the cloth wings which we will accomplish over the summer utilizing Rancho High School aviation students,” said Hale. “In the fall AFA and the Rancho Aviation Academy will begin to display the Flyer at community events promoting interest in aerospace education.”

One of these events will be Aviation Nation, where the flyer will be presented as static display for the public viewing. 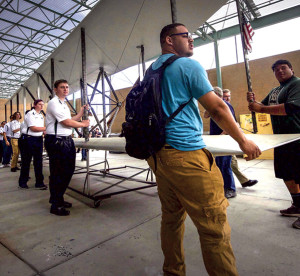 Aviation students move the wings of the USU Wright Flyer into the aviation lab of Rancho High School, May 15. Once assembled, the aircraft will make an appearance during the Aviation Nation air show and open house at Nellis Air Force Base, Nev., in November.

While this year the flyer will only be a static display at Aviation Nation, the hope in the future is to see the aircraft fly in future air shows, said Bob Jones, 99th Force Support Squadron chief of manpower and organization.

Hale said that the AFA hopes to use the new project to spark the interest of aerospace education for students.

“Our first major goal is to be ready for Aviation Nation,” said Hale. “When not being displayed around the community, Rancho Aviation academy will use the Flyer as part of their academic programs in Aeronautical Engineering, A & P Mechanics training and their pilot training program.”

The spark has taken hold with the Wright Flyer project resonating with the aviation students being exited for the challenge of restoring the aircraft to its full form.

“It’s a huge opportunity because I’m able to learn a lot about planes and the engineering process of what we get to do and personally to be able to work on something that’s a part of aviation history,” said Thomas Dicks, Rancho High School student. “It’s amazing.”

For more information about Aviation Nation, visit the www.nellis.af.mil/air-show.