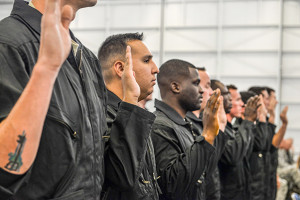 Dedicated crew chiefs assigned to the 57th Wing recite their professional oath during a dedication ceremony at Nellis Air Force Base, Nev., May 19, 2017. Each DCC is assigned an aircraft that they are responsible for maintaining. A dedicated crew chief’s technical knowledge is second-to-none and is heavily relied upon to ensure their aircraft’s mission success.

The qualifications for the position as a DCC are based primarily on skill, rank and time working on an airframe. Airmen have to show leadership qualities, motivation and most importantly, technical knowledge of their specific aircraft.

“These Airmen are responsible for $100 million jets,” said Master Sgt. Thomas Puckett, 57th Aircraft Maintenance Squadron Lightning Aircraft Maintenance Unit aircraft section chief. “They take pride in their aircraft and are always coordinating between production and operations to try and figure out what they can do to improve it.”

As a DCC, Reaves is responsible for maintaining and ensuring his aircraft’s combat-ready status. He launches, recovers, performs pre and post flight inspections, schedules maintenance and coordinates with his pilot to make sure there are no issues with the aircraft. His experience is second-to-none and is heavily relied upon to ensure every mission is successful.

“Being a dedicated crew chief means that you’ve reached the pinnacle of your career field,” said Puckett. “It means you’re the best of the best, and have been hand-selected by your peers and supervisors.” 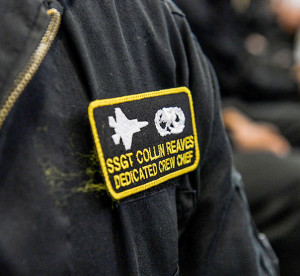 “I love it because you get your name on the side of a jet,” said Reaves. “(The aircraft) is yours and there’s a great camaraderie between the pilot, DCC, and assistant DCC when we’re all on the same aircraft together.”

The camaraderie between the pilot and DCC is built on mutual respect for each others skill set to ensure the aircraft is serviceable to accomplish the mission with one goal in mind to bring the pilot back home safely.