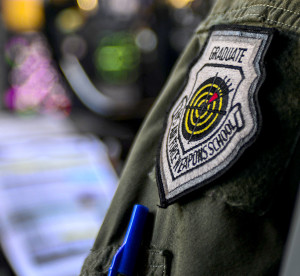 For 68 years, the legacy of the United States Air Force Weapons School at Nellis Air Force Base, Nev., has been to adapt to the current warfare environment in order to produce experts in air power and leaders.

The USAFWS has expanded its integration phases for the 17A class and beyond by focusing on specific lines of operation to create these leaders in the modern era of joint warfare.

This change in focus comes directly from Air Force senior leadership whose priority is to make students self-sufficient leaders in all areas of warfare.

“The U.S. Air Force and the U.S. Army must be ‘joined at the hip’ with the U.S. Navy and Marine Corps,” said Gen. David Goldfein, U.S. Air Force chief of staff. “In order to do so, the Air Force must create leaders who can stand up and lead these campaigns.”

The USAFWS has transformed it method of teaching academics in order to incorporate these priorities into the current Weapons School Integration design.

The primary change to the WSINT curriculum is a building block approach utilized to teach student’s skill sets across specific scenarios, and then building upon these skills by incorporating larger and more difficult problems to solve as the course progresses, said Maj. John Walsh, 17th Weapons Squadron chief of integration.

The academic structure is much like college programs in which students start at the 100 level and progress to senior-level 400 courses.

“We reshuffled the missions and reorganized everything under lines of operations with simpler problems sets overall to deal with the 100 missions,” said Walsh. “Then as students’ progress to the 200, 300 and 400 sets, we continue to grow threats, the complexity increases and the numbers increase in order to prepare them. Giving the students the skill set to move on to the next level.”

Instead of having students focus solely on their respective air frames and air power, the new curriculum focuses on joint integration and synchronizing effects across all domains of air, space and cyber space, said Walsh. 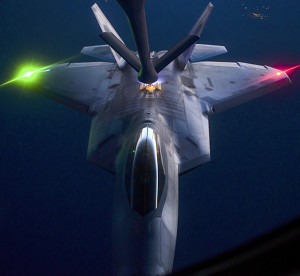 A KC-135, assigned to the 509th Weapons Squadron, Fairchild Air Force Base, Wash., preforms aerial refueling on an F-22 Raptor, assigned to the 433rd Weapons Squadron, Nellis Air Force Base, Nev., over the Nevada Test and Training Range during the United States Air Force Weapons School’s Deliberate Strike Night, June 16, 2016. DSN is part of the final seven day Advanced Integration portion of the Weapons School curriculum; testing stealth and conventional airframes abilities to conduct attacks during the hours after the sun sets.

“Now it’s more of a focused event, focusing specifically with integrated deployment and planning joint doctrine,” said Walsh. “Then we give them broader exposure to joint capabilities, allowing students to incorporate those skills more effectively during flying days.”

Allowing students to grasp these overall processes of joint war fighting beyond their own field of expertise offers a broader exposure to students.

“We want our students to understand, they’re not going to go out and solve a problem with just their own MDS, or just air assets,” said Walsh. “There will always be a need for air, space cyber assets, there non-kinetic effects and joint capabilities to help solve any problem that we are faced with in the future. The changes to WSINT better prepare students for that.”

While the change has been difficult, under the leadership of Col. Michael Drowley, USAFWS commandant, the entire Weapons School has aligned in strategy to create a curriculum that will serve to create experts of air power and leaders for the future of warfare.

“Our strategy is nested in the guidance that flows from the U.S. Constitution to the 57th Wing strategy,” said Drowley. “In addition to our overarching guidance, we are practitioners of warfare and students of war. It is foundational to our purpose.” 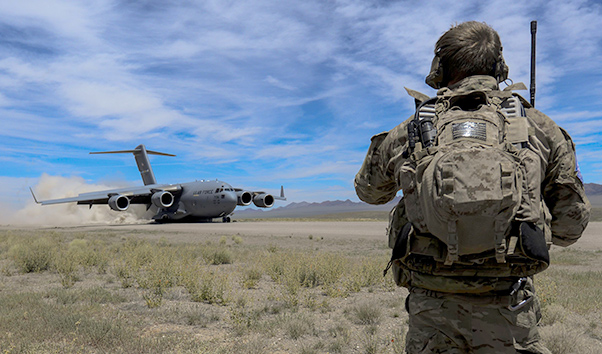 A Combat Controller watches as a C-17 assigned to the 17th Weapons Squadron, Nellis Air Force Base, Nev., lands on an airstrip in the Nevada Test and Training Range during Joint Forcible Entry Exercise, June 16, 2016. The exercise demonstrates the Air Force’s ability to tactically deliver and recover combat forces via air drops and combat landings in a contested environment.