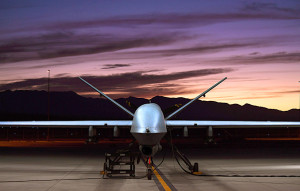 Following the mission brief and pre-flight checks, an aircrew consisting of an officer pilot in command and a career enlisted aviator sensor operator observe a target in an area of responsibility overseas from a cockpit in the United States and waits for the green light from a joint terminal attack controller on the ground.

Anticipation heightens as the JTAC confirms the target and gives the aircrew the clearance to attack. The aircrew then reviews checklists before engaging, adrenaline begins to seep in and the whirring from electronic components in the cockpit recedes from awareness. Their concentration sharpens and as the pilot squeezes the trigger, and a laser guided AGM-114 Hellfire missile is released. The sensor operator hones in on the objective at hand by keeping the laser designator crosshairs precisely over the target and guiding the missile. The countdown begins until impact … 10, 9, 8 …

Unbeknownst to most people, the multi-role MQ-1 Predator and MQ-9 Reaper strikes are coordinated through specific routing chains well before weapons employment to ensure the fulfillment of combat directives, combatant commanders’ requirements and overall rules of engagement.

Even more unknown is the fact that these aircrews follow the same weapons employment process as those in other traditional fighter and bomber aircraft.

“Anytime a munition is employed or dropped by any platform to include our MQ-1s and MQ-9s, those rules of engagement must be satisfied,” said Maj. Brian, 432nd Wing/432nd Air Expeditionary Wing Weapons and Tactics assistant director of operations. “They define the specific requirements as far as who, what and when something can be targeted for the employment of a weapon.”

Brian explained that, like other aircraft, there are two different types of strikes that occur in theater. One is a deliberate strike and the other is a dynamic target situation.

“The deliberate strikes are all targets that have been nominated, gone through a vetting process and ran through the Combined Air Operations Center for validity,” said Brian. “They go through target nominations and then it’s passed off to targeteers, as well as the individual units, that will execute those strikes to conduct the weaponeering and through the CAOC, they satisfy the legal requirements in terms of ROE, weapon alignment and specific collateral damage estimation for that target.”

Upholding the laws governing the use of military force is paramount to every aircrew in ensuring that the enemy can be eliminated without harm to civilians and friendly forces while, also, strictly aligning with the Law of Armed Conflict to meet legal and moral requirements.

Brian said most of the 432nd Air Expeditionary Wing strikes are conducted in a dynamic target situation.

“Dynamic targeting is executed using close air support doctrinal procedures,” said Brian. “Within the CAS doctrinal procedures, once a target is identified on the ground, a JTAC contacts the aircrew and starts to generate a plan as far as how they’re going to conduct and execute that strike.”

A dynamic target strike is a coordinated effort between the aircrew and a ground team within a joint operations center.

“Once we’ve found valid targets, I’m going to notify the JTAC and from there he’s working on his side to get approval for the strike,” said Capt. Chris, 42nd Attack Squadron MQ-9 pilot.

Along with communicating with the aircrew, the JTAC coordinates with his ground force commander.

“The ground force commander is working in sync with a targeteer for collateral damage estimation and a judge advocate to ensure that Law of Armed Conflict in terms of proportionality, use of force and all legal requirements are satisfied,” said Brian. “Once he confirms that we have a valid target and the proportionality and collateral damage estimation is acceptable based on the commander’s intent and guidance, he then seeks target engagement approval authority from the first one-star in his chain of command.”

If the situation and circumstances are aligned the commander authorizes the strike and at that point the aircrew is given clearance to then engage the target using the designated weapon as decided by the aircrew, Brian said.

“When the strike is approved, he will pass me a game plan 9-line.  At that time, I will brief the sensor exactly how this weapons delivery will be carried out,” said Chris.

The CAS doctrinal procedures apply to all aircrew performing close air support, regardless of the aircraft used.

“It’s [CAS procedures] the same for all U.S. military,” said Brian. “It’s a joint publication that defines those procedures and how it works.”

Certain factors determined by the CAS doctrine and the varying length of time in the confirmation of targets, emphasizes the need for persistent and precise attack capabilities provided by the multi-role MQ-1s and MQ-9s.

“Personally, I’ve eliminated enemy forces that were engaging friendlies 15 meters away, so it’s extremely important to employ quickly and effectively and the MQ-9 is one of the best assets in the Air Force to accomplish this,” said Chris.

The routing chain from target identification to strike can take anywhere from a few minutes to several hours depending on the significance and situation of the strike. Any strike done with a JTAC goes through the same process regardless of what platform is employing the weapon.

“One advantage that the MQ-1 and MQ-9 has over some of our more traditional aircraft is its persistence,” said Brian. “Since our mission durations are so long, we’re able to maintain custody of that target for an extended period of time and provide an in-depth characterization of the target, ensuring the target is hostile.”

Brian added, because of their sensor capabilities and persistence over a target, MQ-1 and MQ-9 aircrews are able to integrate the entire targeting process from identification to final destruction and strike evaluation into a single platform versus requiring different multiple assets to accomplish the mission.

Along with bringing a streamlined impact to the fight and having the capability to provide CAS in dynamic situations, aircrews also have emergency procedures to follow, in case the targeting situation changes unexpectedly.

Brian said that there are two methods to ceasing an attack after the order has been given. The first method is when the JTAC gives the abort command and the aircrew foregoes releasing the weapon, resets and waits for those legal or collateral requirements to be satisfied before another clearance to strike is given.

He explained a post-launch abort as the second method and is designed to avoid collateral damage or civilian casualties, if the situation changes after the laser guided weapon had been released. The JTAC will give the order, and the sensor operator will adjust the endpoint for the weapon with the laser designator to an area where there is no risk of collateral damage.

Brian went on to say that MQ-1 and MQ-9 aircrews receive special training to understand ROE as well as the commander’s guidance and intent for a particular strike; this complete understanding demonstrates a high level of proficiency in flying daily combat missions to support multiple theaters abroad.

Taking the fight to the enemy requires all aircrews to follow strict guidance in order to eliminate the enemy and safeguard friendly and coalition forces. The aircrews flying the multi-role MQ-1s and MQ-9s follow the same doctrine in support of 24/7 combat operations daily while adding an extremely professional and precise persistent attack and reconnaissance force to the Joint and coalition team engaged on the battlefield.