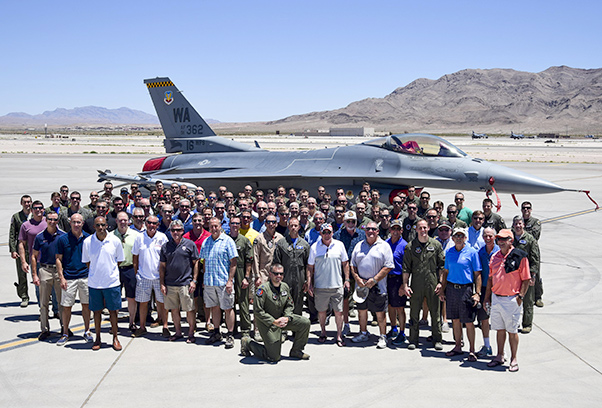 Current and former pilots from the United States Air Force Weapons School F-16 Fighting Falcon division pose for a group picture in front of an F-16 June 15, 2017, at Nellis Air Force Base, Nev. THe pilots celebrated the division’s 35th Anniversary with a reunion of members from the first pilots in the division 35 years ago to pilots currently assigned to the 16th Weapons Squadron.

The F-16 division started as a fighter weapons squadron with a focus on traditional dogfighting. It has now become the largest flying squadron in the Weapons School.

Although Tek became an instructor pilot for F-16s in 1990, he still recalls life in the squadron and how the mission has changed after nearly 30 years.

“Back then, there was less automation because we were just getting started with precision weapons like the laser-guided bomb,” said Tek. “There was still a focus on the purity of one guy against another guy and who could fly the plane the best to achieve a victory.”

Over the decades, the F-16 division has updated its mission focus and equipment to reflect the most current technology available for the aircraft. Today, the 16th WPS has nearly 30 instructor pilots and almost as many aircraft.

“An event like this gives us both perspectives; from the older guys seeing what they started and where it’s at now to us younger guys being able to look back and appreciate the guys who laid the foundation for us,” said Maj. Rolf Tellefsen, 16th WPS instructor pilot.

In 35 years, nearly 800 F-16 pilots had the opportunity to be a part of the 16th WPS. The Weapons School graduates nearly 20 F-16 pilots each year with no signs of slowing down.

“The 16th WPS is going to be around for a while, and that’s what’s so great about this reunion,” said Tellefsen.

However, becoming a member of the 16th WPS as an instructor pilot is not an easy task. Tellefsen said to become a student you have to consistently display these three characteristics of being humble, approachable and credible; on top of excelling in an already rigorous workload from the Weapons School.

“By the time you’re accepted as a student, you’ve already established yourself as somebody who’s credible as a pilot,” said Tellefsen. “That’s important, but it doesn’t matter how much you know if nobody wants to talk to you, so that’s why it’s also important to be approachable and humble.”

This year, 12 members of the 16th WPS graduated the Weapons School and added to the already incredible legacy of 35 years of F-16 fighter pilots.

“I graduated in 1987, and it’s one of those things you don’t think you can do until you go out and succeed,” said Tek. “Going through the Weapons School as a student was the hardest thing I’ve ever done, and I thought I was never coming back until two years later when I returned as an instructor pilot.”

Over the years, the F-16 has dominated the skies as a multi-role fighter jet with hundreds of combat missions under its wing. None of that would be possible without the thousands of Airmen who have proudly sewn on the 16th WPS Tomahawk patch or the brotherhood of pilots created around a single airframe.