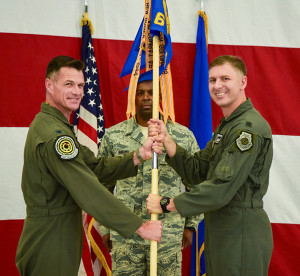 The 6th Weapons Squadron, formerly known as the 6th Aero Squadron, the 6th Pursuit Squadron, and the 6th Night Fighter Squadron, has been inactive since February 1947 when it was subject to force-wide budget consolidations.

In December 1916, the Signal Corps expanded the number of Aero Squadrons from two to seven because of World War I. The 6th Aero Squadron, as it would later be designated, was first organized in December 1916 at the Army Flying School at Rockwell Field, San Diego, Calif., and then sent to Fort Kamehameha, Hawaii, to establish a permanent air presence on the islands.

The squadron remained in Hawaii throughout U.S. involvement in World War I, and was working to improve the integration of air defenses over the island before it lost all if its 18 aircraft in the surprise Japanese attack at Pearl Harbor Dec. 7, 1941. Out of the ashes, the unit was quickly re-equipped with P-40C Warhawk fighter aircraft, re-named the 6th Night Fighter Squadron, and thrust into some of the most harrowing aerial conflict seen anywhere during World War II.

This rich legacy of valor makes the new 6th WPS the ideal home for the Air Force’s newest investment in air dominance; the F-35A Lightning II.

“This squadron has a great history and legacy dating all the way back to World War I,” said Lt. Col. Michael Blauser, 6th WPS commander.

According to Blauser, the squadron will be carrying those time-honored traditions forward as it strives to make some history of its own with the F-35 weapons instructor course curriculum.

The USAFWS currently comprises 18 squadrons and provides the world’s premier postgraduate weapons and tactics employment training. The rigorous USAFWS curriculum, joined together with the F-35As state-of-the-art capabilities and the deep-rooted history of the 6th WPS, will produce humble, approachable, and credible weapons officers determined to maintain dominance over future battlefields.

“We’re headed into uncharted waters,” said Col. Michael Drowley, USAFWS commandant. “Every day will require steadfast leadership to ensure our fifth-generation capabilities are as lethal and dominating as possible.”

The 6th WPS is projected to be the USAF Weapons School’s largest squadron by 2023, with 30 instructors and 24 assigned F-35As.