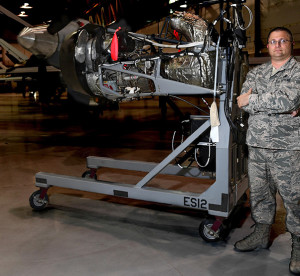 Master Sgt. Eric, 432nd Aircraft Maintenance Squadron Reaper Aircraft Maintenance Unit production superintendent, stands with the engine trainer he created June 19, 2017, at Creech Air Force Base, Nev. He saw a need to have a power capable training engine to practice engine rigging, which involves tuning the actuators that translate electrical signals to mechanical commands. If done improperly the engine can shutoff when not intended. The trainer allowed maintainers to train on this vital task without taking an operational aircraft out of the rotation.

In order to enable airpower, the Air Force calls upon skilled and competent maintainers to perform all required functions to keep aircraft at the ready.

This means maintainers must be properly trained to keep the mission going, so when Master Sgt. Eric, 432nd Aircraft Maintenance Squadron Reaper Aircraft Maintenance Unit production superintendent, had the opportunity to solve a problem within the MQ-9 Reaper community, he seized it.

The issue was the lack of opportunity to train on MQ-9 engine rigging, a critical task that involves tuning the servos (actuators). The servos take electrical signals and translate them into mechanical commands to ensure the motor performs the correct orders from the pilot. If done improperly, the engine can shutoff when not intended, which when flying a multi-million dollar aircraft with only one engine is a big concern.

This is a job not performed very often, but when it’s needed, it’s vital to get it right. AMXS maintainers support one of Air Combat Command’s most requested airframe downrange, so available aircraft are limited.

“Not only are we supporting downrange operations, but local training sorties as well, so our operations tempo didn’t allow us to get an aircraft for training very often,” Eric said. “Because this is such a critical task we needed a way to train.”

In 2016, a crashed aircraft from downrange had been sent back to Creech before disposal. The MQ-9 in question had severe structural damage, but the innards were still functional. This got Eric thinking.

“I wondered if it was possible to make the training engine we already had power capable from this crashed aircraft,” he said. “I did the research and it looked possible, then I made sure I had the right servos and controllers and I set off to find the rest of the parts needed.” 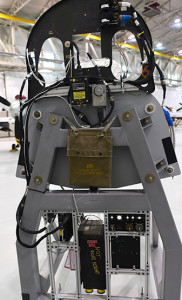 It took about eight months of Eric’s spare time before and after shift, but in January 2017 he had finished a fully functional MQ-9 engine trainer. In fact, the trainer was built the same way as a functional MQ-9, with the parts being stored on a compact and portable stand. This is particularly beneficial because maintainers can seamlessly transfer from training to an operational aircraft engine.

However, the biggest advantage is the amount of time saved.

“On an operational aircraft the training alone would take four to five hours but once you’re done training the Airmen you have to put the plane back to an operational state, which takes another three to four hours,” Eric said. “After that it needs fuels support, quality assurance inspections and engine runs which takes even more time. We’re saving a minimum of eight to 12 man-hours per training session.”

That figure doesn’t count the time spent waiting for an operational aircraft to become available. Whereas, the engine trainer is available 24/7/365 and also helps inexperienced maintainers get a hands-on approach to learning the MQ-9 airframe, which improves the unit’s and maintainer’s readiness.

“Having the training engine allows all aircraft in the unit to be available for their intended purpose…flying,” said Jeffrey, 432nd Maintenance Group Air Force Engineering and Technical Support. “Normally, aircraft have to be pulled from the flying schedule and dedicated for training use that gets reported as ‘non-mission capable,’ which negatively affects the unit’s mission rates. Having the training engine has a positive effect on the unit’s available aircraft and mission capability rates.”

Jeffrey also said that Eric saved the unit and the Air Force over $1 million by utilizing serviceable parts scavenged from crashed aircraft rather than buy new parts. 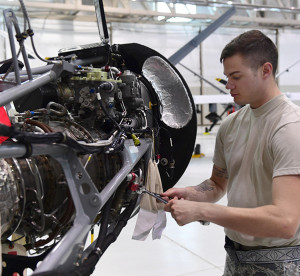 “I’ve been here since 2012 and this trainer is something we’ve needed for a long time, but we didn’t have available assets,” Eric said. “Once the assets became available, I made the time because our Airmen deserve that.”

“This trainer helps because our Airmen can get hands-on training at any time,” said 2nd Lt. Owen, 432nd AMXS Reaper AMU assistant officer in charge. “It can also be programmed to display troubleshooting issues, so our maintainers have to dig into the schematics, find the problem and fix it. I’ve been in the Air Force 15 years and I’ve never seen anyone do anything like this before.”

While the trainer was developed for the AMXS, General Atomics and other contracted companies have also utilized the engine trainer to learn or refresh their skills. The blueprints to the design have been made accessible to all MQ-9 units in the Air Force.

“Master Sgt. Eric is one of those guys who come along once in a blue moon,” Jeffrey said. “He is highly motivated and has more initiative than anyone I’ve met in a long time. The idea of this trainer was all his and he deserves 100 percent of the credit for the outcomes.”