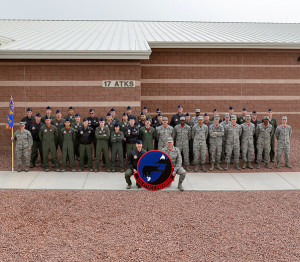 For the past 75 years, the 17th Attack Squadron Bulls have played an integral part in the defense of the nation by providing combatant commanders with reconnaissance capabilities, and more recently, with precision attack capabilities.

For the past 75 years, the 17th Attack Squadron Bulls have played an integral part in the defense of the nation by providing combatant commanders with reconnaissance capabilities, and more recently, with precision attack capabilities.

On July 23, 1942, in the midst of World War II, the 17th Photographic Reconnaissance Squadron activated, and was tasked with flying the P-38 Lightning and B-25 Mitchell over the Pacific Theater, to observe and map enemy movements. After the war, the 17th transitioned to aircraft such as the RF-84 Thunderflash, the RF-101 Voodoo, and the RF-80 Shooting Star. In 1958, the squadron realigned under the 432nd Tactical Reconnaissance Wing, now known as the 432nd Wing.

Shortly after being assigned to the 432nd TRW, the squadron moved to France and then to England before being inactivated in 1979. In March of 2002 the Bulls reactivated and began a new mission flying newly armed MQ-1 Predators in support of the fight against Al Qaeda in response to the attacks on the morning of September 11, 2001.

“One of the cornerstone beliefs of our squadron is that “today’s date is 12 September 2001,” which reminds us to approach each day and each mission with the same passion and purpose that drove the formation of our squadron in the aftermath of Al Qaeda’s attacks on the homeland,” said Lt. Col. John, 17th Attack Squadron commander.

This year, the 17th ATKS celebrates its 75th anniversary, and currently flies the MQ-9 Reaper.

“Throughout our 75-year history, as we transitioned airframes and designations, the common thread weaving through our heritage has always been reconnaissance,” said John. “Today, our squadron achieves national security objectives through worldwide dominant persistent attack and reconnaissance operations.”

With the addition of the MQ-9 Reaper in 2006, the 17th became the Air Force’s first weaponized and dual-qualified remotely piloted aircraft squadron. By extension, the 17th has also been one of the first combat squadrons to receive and employ emerging technologies by industry partners.

“Along these lines, it’s important to stress that while technology is a critical enabler, technology is not the decisive key to success,” John said. “The decisive key to success is the innovation of our airmen.  Our Airmen are trusted and empowered to develop the tactics, techniques and procedures required to operationalize these technologies in training, prove them in combat, then share what we’ve developed and learned throughout the entire RPA community and the joint force.”

John attributes the effects and success of his Airmen by their understanding of the critical nature of their work, how they develop leaders within the squadron and their genuine belief in driving positive change through the RPA evolution.

“It’s an absolute honor of a lifetime to lead and serve alongside the men and women of the 17th Attack Squadron,” John said. “They are America’s finest sons and daughters and it’s a humbling experience to watch our airmen selflessly sacrifice, both personally and professionally, as they achieve our enduring end state of defending freedom and protecting the homeland.”