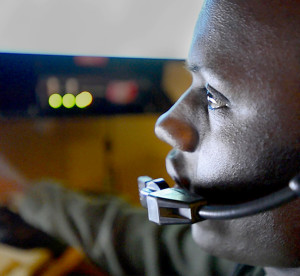 Staff Sgt. Kevin, a 432nd Wing sensor operator, flies a mission June 13, 2017, at Creech Air Force Base, Nev. Kevin and other MQ-9 aircrew members assisted the Government of National Accord and other coalition partners to remove Islamic State of Iraq and Syria fighters from Sirte, Libya. In December when Sirte was declared liberated, Reaper aircrews had shot over 60 percent of the 495 U.S. conducted airstrikes of Operation Odyssey Lightning, 70 percent of those were ‘danger close’ employments, a term used to describe a minimum distance of risk from a munitions explosion to friendly forces.

In May 2015, Sirte, Libya, still recovering from the fallout of civil war, fell to the Islamic State of Iraq and Syria forces. It took a year until the United Nations backed government of Libya, the Government of National Accord, launched an offensive to retake the city.

On Aug. 1, 2016, the Pentagon announced Operation Odyssey Lightning in which United States military forces would join the GNA against ISIS.

While U.S. Marine Corps AV-8B Harrier jets and AH-1W Super Cobra attack helicopters struck ISIS territory in the limelight, remotely piloted aircraft aircrews provided dominant persistent attack and reconnaissance from imperceptible altitudes over Libya quietly from their cockpits in the U.S. In fact, the crews were overhead Sirte gathering information before the operation even began.

“Initially we flew over Sirte to be the eyes and ears to look for ISIS,” said Col. Joseph, 432nd Operations Group commander. “In August of 2016 our role changed as the GNA forces were [overwhelmed] taking the city back, so we were given permission to use defensive weapons strikes to support them. We continued until the GNA were able to take the city back from ISIS in December of 2016.”

U.S. and coalition forces aimed to make quick work of regaining the coastal city from ISIS and free thousands of civilians. However, because Sirte is an urban environment full of tightly woven infrastructure, it demanded different and sharper tactics along with extreme precision from the RPA crews.

“It was a concerted effort between those of us in the air, ground and partnered forces to remove ISIS from the town,” said Lt. Col. Ronnie, a 432nd Wing squadron commander. “We needed to make sure we met the requirements of the ground commanders, so when ground forces were ready to move into the town, they were as ready as they could be.”

The crews had to be ready to operate successfully in the congested city center, which required tactics they have learned in combat within the past few years. In past operations such as Enduring Freedom and Iraqi Freedom, RPA aircrews flew over mostly open areas with few and small structures. Since beginning the fight against ISIS, they have adapted to the challenges of operating in dense urban surroundings with a large number of tall closely-knit structures.

“One of the challenges is being able to always see what’s on the ground,” Ronnie said. “You could be following a vehicle or person and if they turn a certain way our view could be obscured by another building, so it requires a greater degree of airmanship on the part of the crews to know where they are and to be constantly vigilant.”

Ronnie went on to say that undoubtedly the most difficult tasks are employing precisely with enemies in close proximity of friendlies. With all of this in mind, the operation began and the GNA pressed forward into the city on the ground with RPAs overhead providing close air support, employing bombs and missiles in coordination with the AV-8B Harriers and AH-1W Super Cobras flown by the Marine Corps aircrews.

“When the ground troops started moving into the town it got a little risky for them,” Ronnie said. “They were getting shot at repeatedly when they were calling us for strikes to take out the enemy. It was very close quarters and required a lot precision piloting of the aircraft and weaponeering of the munitions. When it came time to put the weapons to the ground our pilots and sensor operators did a great job.”

During the engagements, pilots maintained responsibility for positioning the aircraft and interacting with the ground troops while the sensor operators kept visuals on the enemy fighters and guided weapons to targets. While the tasks were separate, both aircrew members had to ensure they could employ the munitions in such a close environment without hitting the ground forces or civilians.

“I personally engaged forces in close proximity of friendlies which required a lot of coordination,” said Capt. Abrham, a 432nd WG RPA pilot. “We had to make sure they were ready for us to employ that closely. If anything went wrong they could have been casualties of the strike.”

Ground forces experienced an entrenched enemy with snipers laid out throughout the city, which required quick thinking and action from the RPA crews to support.

“As the battle went on we had to adapt the style to fight the enemy we were engaging,” Abrham said. “Some of the tactics were created and some of the persistent attack capabilities that hadn’t been used widely before were developed because of this operation.”

New strategies included the expansion of two-ship RPA operations, which utilizes two RPAs and aircrews in the same vicinity to achieve a common goal, typically demonstrated by traditional airframes.

“We did multi-ship coordination for about two thirds of the fighting in Sirte,” Ronnie said. “It didn’t start out as multi-ship, but we were able to brief up expectations and set standards that allowed us to execute multi-ship tactics and attacks. We were able to provide laser spots, or through attack coordination and employ multiple weapons from multiple airframes on targets all within the same proximity of one another.”

Having numerous RPAs in the air allowed the aircrews to fully coordinate between which aircraft had the most situational awareness, better proximity and capable for engagements.

In fact, by December 2016, RPAs had executed a significant percentage of the 495 U.S. conducted airstrikes of OOL. The majority of those strikes were ‘danger close’ employments, a term used to describe a minimum distance of risk from a munitions explosion to friendly forces. Such an intense operation required extreme focus and flawless execution from the RPA aircrews engaged in the fight.

“Some of the challenges are being on your ‘A-Game’ all the time ready for the fight to go into combat at every moment because that’s exactly what we were doing,” Abrham said. “Within minutes of entering the cockpit we could be engaging the enemy and supporting friendly forces.”

“I can never say enough of how well the crews did,” Ronnie said. “They went about their job with professionalism and dedication.”

On Dec. 19, 2016, Sirte was declared liberated from ISIS. With the help of RPAs and other coalition aircraft, the GNA was able to push the terrorists into a retreat and out of the town.

“We were successful in this operation and it’s one we like to highlight our triumphs but this is a great story about airpower,” Joseph said. “We were able to support indigenous ground forces to take the fight to a common enemy. The way we were able to provide eyes, ears and strikes to the GNA forces I’m convinced was a big part of their success in taking the last few miles of Sirte.”