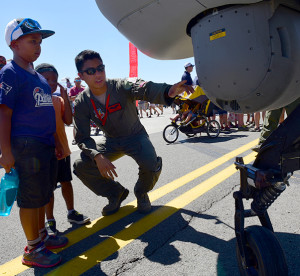 First LT. Donald, 17th Attack Squadron pilot, shows a child the Multi-Spectral Targeting System at the Skyfest air show, July 29-30, 2017, at Fairchild Air Force Base, Wash. During the show, Airmen were able to answer questions regarding how the MQ-1 can accomplish its missions.

While displaying the Predator, the Airmen also explained how the remotely piloted aircraft mission is executed.

“We came out to educate the local community about our mission sets while developing community relations,” said 1st Lt. Donald, 17th Attack Squadron pilot. “We had pilots, sensor operators, intelligence and maintenance personnel explain first-hand RPA operations from the ground to executing the mission.”

The MQ-1 drew large crowds of intrigued spectators despite being in the company of larger aircraft such as the A-10 Thunderbolt II and the KC-135 Stratotanker. For many, this was the first time seeing a Predator and learning about its capabilities.

Many people asked where the pilot operates and how they can fly the mission from the continental United States. Overall they were surprised by the effectiveness and the importance of the RPA enterprise to the Air Force, joint services and coalition partners.

“It was rewarding to interact with kids and others who had little to no knowledge on RPAs and watch their eyes open in awe when we showed that we’re more than just a ‘drone’,” Donald said.

“The Predator is pretty awesome,” said Dominic, 7. “I can’t believe it can fly with nobody inside of it.” His father Devlin, a Spokane local, said that the MQ-1 is valuable in today’s fight, especially since a pilot isn’t being put in danger because they can fly from home station.

“Our attendance was a huge win for the RPA mission as we were able to reach so many people,” Donald said. “Everyone did a great job and it was a success. I couldn’t have had a greater group of Airmen come out to explain their respective career fields any better.”