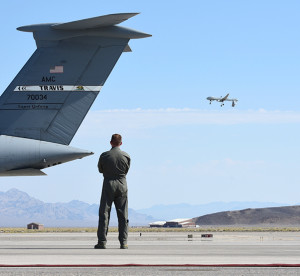 Maj. Richard, 432nd Wing MQ-1 Predator pilot, watches the Predator fly over a C-5M Supergalaxy while reminiscing how about how he became a U.S. Air Force pilot. As a seven-year-old boy, Richard fell in love with the C-5 and aviation during Lethbridge International Airshow in Alberta, Canada. More than 20 years later he became a C-5 pilot, flying for four years in that airframe. Now, he flies the MQ-1 Predator.

Inspiration can be fleeting or it can be enduring. As seven-year-old boy, Richard felt this powerful drive during a family outing to an air show, he had no idea it would shape his future career helping him become a U.S. Air Force pilot.

“Lethbridge [Canada] was the first air show I went to when I was a kid,” said Maj. Richard, 432nd Wing MQ-1 Predator pilot. “We looked at all the airplanes and there wasn’t a single airplane that made more of an impression on me than the C-5 [Galaxy] did. I was just enthralled and I didn’t quite know why, but even at that age I knew I wanted to be a part of it and fly it. It became my greatest dream.”

“That was the first big air show we had been to and it evolved after that,” said Janet, Richard’s mother. “We began pinpointing where other air shows were, but ultimately it started with the Lethbridge air show and I think that’s where Richard discovered that being a pilot was the career for him.”

“I think it was a turning point in my life despite being so young and while it seems strange, I still reminisce about it,” Richard said.

This genuine inspiration, like a grade-school tryst, carried with him throughout his adolescence while whims of the Galaxy filled his dreams. His love for airplanes was so strong that during one school project to build and race toy cars, he became disqualified for putting wings on his car. Eventually, Richard would start pursuing his passion.

“When I was a teenager I took flying lessons to see what I could do in order to fly,” Richard said. “In my twenties I started going to college and began looking into the Air Force. I learned everything I needed to do and in my mid-twenties I went to pilot training. My dream assignment was flying the C-5. That was always my goal, focus and drive and it really did stem from my childhood.”

At age 27 Richard completed pilot training and awaited his fate to see if he would be assigned to his dream aircraft, the C-5 Galaxy.

“Assignment night was probably the longest night of my life,” he said. “My flight commander knew what I wanted and he delayed me to the end of the night and when they called my name, my hands were shaking. Then he showed a picture of a C-5 and I remember the whole room going crazy. My classmates all rushed to congratulate me, my wife was screaming and I cried because I knew everything I had worked for had paid off.”

“We were all there waiting with baited breath and when Richard got his assignment for the C-5, we were all overcome because he got what he wanted and you don’t always get what you want,” Janet said. “That was a real moment, the type of moment you never forget.” 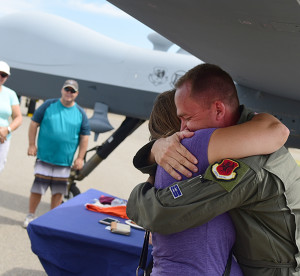 Maj. Richard, 432nd Wing MQ-1 Predator pilot, hugs his cousin July 15, 2017, at the Lethbridge International Airshow in Alberta, Canada. Richard grew up with his cousin in Lethbridge for 15 years hasn’t seen her since moving to the United States. Richard was able to reconnect with family and friends in his hometown while in town showcasing the MQ-9 Reaper and its capabilities.

Richard flew C-5s for four years working his way to aircraft commander and tallying more than 10 trips to Afghanistan. Richard was then assigned to Creech AFB where he has flown the MQ-1 Predator in combat from the Nevada desert for the past four years, mirroring his C-5 assignment.

“I fly the remotely piloted aircraft now and it was a real exciting opportunity for me because the one downside of the C-5 is being gone all the time,” he said. “I wanted to be able to spend more time with my family, but I also still wanted to be actively engaged in flying. Having the opportunity to both fly and to stay close to home has been a great experience.”

For this year’s 2017 Lethbridge International Air Show, a C-5 from Travis AFB, Calif., picked up the MQ-9 Reaper model from Creech for its international debut.

“I think it’s an amazing connection and ironically as a C-5 pilot, I transported an RPA downrange and now I’m flying one and it’s really interesting to see how everything has come full circle,” Richard said. “When I was in Lethbridge I saw a C-5 and wanted to fly it and twenty five years later I did. Then I went to RPAs and now a C-5 is coming to pick us up and fly us to the air show and I’ll be there with both of the aircraft I’m familiar with; right back where it all started.”

During the air show Richard reunited with friends and family he hadn’t seen in more than 15 years and showed them both of the aircraft he has flown in his career.

The most impactful and emotional experience for Richard was seeing the plane that started it all in the same place, at the same airshow and with his parents…30 years later. 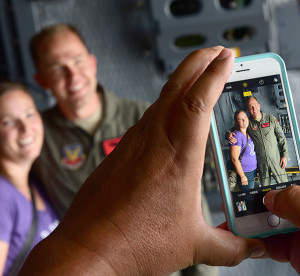 Maj. Richard, 432nd Wing MQ-1 Predator pilot, takes a photo with his cousin July 15, 2017, at the Lethbridge International Airshow in Alberta, Canada. Richard grew up near Lethbridge for 15 years and hasn’t seen his cousin since he moved to the United States.

“Coming back and standing in front of the C-5 with my mom and dad, to see where it all began was the best part because it brought back so many memories,” he said with tears and a broken voice. “Seeing that I wanted to become a pilot as a kid and knowing I accomplished it is amazing.”

While he may have stood the in the same place physically, he is no longer in the same place in life. He is a seasoned pilot with combat experience, a husband and father of four children who looks forward to what he can do for the Air Force in the future.

Richard also said he can’t truly express how grateful he is for this opportunity and says it’s been the highlight of his career, but he attributes all of his success to his parents.

“I owe my father everything because I don’t know what I’d be doing now if he hadn’t taken me to that air show,” he said. “Everything I’ve ever accomplished, I owe to my parents because there is no way I’d be where I am without them.”

“I’m so proud of him and I think he’s really enjoyed being at Creech flying MQ-1s,” Ronald said. “In my opinion, these aircraft are the future.”

Now, Richard looks forward to providing persistent attack and reconnaissance for the joint force commanders and developing the next generation of Airmen.