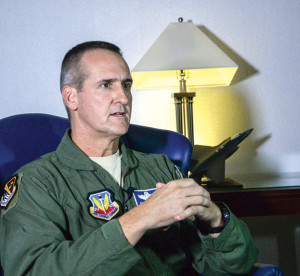 The men and women of the U.S. Air Force Warfare Center will once again be on the leading edge of testing, tactics, and training innovation, establishing the force’s most ambitious knowledge outreach program to date.

Secretary of the Air Force Heather Wilson announced the launch of AFwerX during her visit to Nellis Air Force Base, Nev., July 21.

The first AFwerX location will be near the University of Nevada-Las Vegas, which is a prime location allowing students, faculty, small businesses and entrepreneurs to easily connect with the Air Force community.

The Las Vegas storefront is scheduled to open in early 2018, and will serve as a collaborative, creative concept exchange hub existing to attract and maximize ideas from public, academic, small business and industry visionaries.

Other top leaders joined the Secretary in recognizing a need to reinvigorate the force’s innovation culture. Though the Air Force has worked to maintain strong relationships with some of the world’s foremost defense technology giants, according to Wilson, no stone will go unturned in the search for the next revolutionary breakthrough.

“The Air Force has great relationships in all of our military industrial partnerships,” said Maj. Gen. Peter Gersten, USAFWC commander. “Working with these companies, we’ve slayed speed, stealth, cyber and space challenges on a level that the world is envious of. But what we’ve also found is that 80 percent of the U.S. population has no idea how to enter into the Department of Defense’s domain for new programs.”

The AFwerX concept was inspired in part by the successes of U.S. Special Operations Command’s SOFWERX storefront in Tampa, Florida. The model provides an easily accessible physical and online space, which allows innovators to bring ideas directly to operators.

AFwerX will work constantly to mitigate bureaucratic stove-pipes and lower the barriers between Air Force decision-makers and academic scientists, underground hackers, or even garage tinkerers. By doing so, the USAFWC hopes to unlock potential currently unrecognized in the industry.

According to Gersten, many potential innovators see military acquisitions and testing programs to be too formidable, too vast in reach and scope to approach with new, unproven technologies and ideas. Many are unsure of how to formally present their ideas. AFwerX-Vegas will be the first of many locations around the country to break down these obstacles and serve as the face of an Air Force open and eager to listen.

“If we’re not reaching these segments of our population who are coming up with some fantastic ideas, then we’re not tapping into the full capabilities that our country affords us,” said Gersten. The AFwerX program is us seizing that opportunity.”

Once operations begin, AFwerX locations will serve as the central nodes for Air Force innovation engagements. Staff will query Air Force experts about their challenges, needs, and priorities. They will solicit new solutions to those challenges, and provide analysis to drive Air Force investments. Also, they will serve as a conduit between storefront customers and military leadership, and they will facilitate rapid prototyping and testing for projects that future and present Airmen need most.

When specific problems are identified, AFwerX will issue out challenges, called “Sprints,” during which the brightest minds will present solutions, and compete for small monetary rewards and initial prototype investments. Prior to taking a concept to the next level, it can be tested in-house at the AFwerX facility, which is set to include demonstration and garage areas along with a number of mini-labs.

In pursuing a high number of these “small bet initiatives,” Gersten has no doubt that AFwerX will produce a gem.

“Some of the projects we’re involved in are massive, and they’re expensive,” said Gersten. “Because of this, it’s incumbent on us as military members to be very frugal with our taxpayers’ money.”

On problems of smaller relative magnitude, however, the USAFWC sees an opportunity to spend less while maximizing achievement.

“We can do a series of small-bet Sprints — take the best of breed, fail 75 percent of them and find the best one,” said Gersten. “Then the aggregate, because we’re such a big organization, may end up saving us hundreds of millions of dollars.”

When AFwerX-Vegas achieves full operational capability early next year, its staff will mirror exactly the type of people it strives to reach. Active-duty service members, academic fellows, interns and cadets from local universities will come together under one roof seeking answers to today’s most pressing questions. Maybe you can help with the ones we’ll face tomorrow.

“We know there are innovations out there,” said Wilson. “Innovations in software, in materials, in all kinds of things. AFwerX will change the way we do business with entrepreneurs.”