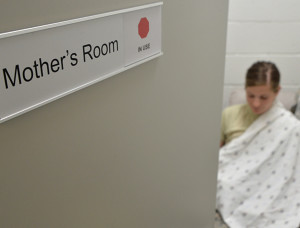 First Lt. Cynthia, an intelligence officer with the 867th attack squadron at Creech Air Force Base, Nev., prepares to use the mother’s room at the 22nd Attack Squadron, August 30, 2017. Cynthia and other Creech mothers were successful in their campaign for a mother’s room on the south side of base and are hoping to get another on the north side of the base.

The 22nd Attack Squadron at Creech Air Force Base, Nev., has finalized the details of its first mother’s room and ushered out the National Breastfeeding Month of August.

The campaign for the mother’s room started in January and faced obstacles such as trying to find available space, getting renovation approval, and funding for the project before its recent opening.

“Having an accessible, dedicated and comfortable space to pump helps empower Airmen to do something that is important for their baby and themselves,” said Capt. Jessica, 22nd ATKS staff officer.

This room will give mothers the privacy to use a breast pump during their aircrew breaks and extended hours at the squadron. Building a pumping room and accommodating a mother’s demands while serving showcases the support the military has for women.

“In my opinion, a pumping room is a basic necessity and it affects everyone when we don’t provide for basic human needs,” said 1st Lt. Patrick, 22nd ATKS resource advisor.

According to Air Force Instruction 44-102, breastfeeding is the optimal nutrition for the first six months of a baby’s life and extensive medical research has proven that breastfeeding has notable health, developmental and economic benefits for both mother and child.

“More than a few times I would be pumping and someone would knock and I would say ‘busy’ or yell ‘no’ and they would still attempt to open the door,” said 1st Lt. Cynthia, previously assigned to the 22nd ATKS. “So, I learned to sit next to the door on the floor or in a chair and keep the door shut with my foot.”

The AFI also states that the Air Force Medical Service recommends that supervisors work with their breastfeeding members to allow time to pump breast milk in a room that is adequately clean and private.

Many military mothers struggle to find the time and place to nurse while working. In order to balance their lives as both dedicated mothers and military personnel they have resorted to pumping in cars, offices or even restrooms.

The room has a cipher lock that only moms using the room will have access to, added Cynthia. There is a reclining chair, wipes to clean up after pumping and a small refrigerator to put the milk in. There is also an outlet for electric pumps.

The 22nd ATKS demonstrated the 432nd Wing’s priorities by empowering its personnel while supporting the Hunter family, marking another step toward improving the RPA enterprise.