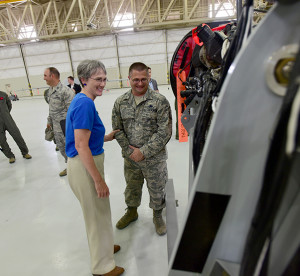 Master Sgt. Eric gets recognized by the Secretary of the Air Force Heather Wilson on Creech Air Force Base, Nev.

CREECH AIR FORCE BASE, Nev.– When Master Sgt. Eric took his senior NCO creed he promised to serve beyond the call of duty and take care of those following in his footsteps.

He has kept his promise by innovating and making life easier for his Airmen across the MQ-9 enterprise.

He was recently recognized for building an engine trainer to expedite MQ-9 Reaper maintenance training requirements which saved time and money by using recycled parts from a salvaged aircraft. The plans for the trainer have since been distributed to three other installations to improve efficiency across the Reaper force.

While the engine trainer used the downed aircraft’s innards and electrical components, Eric also harvested the outer components and created a fully-formed aircraft model in order to better serve his Airmen and ultimately, the Air Force. As build lead, Eric worked to secure funding, design plans, and to write build procedures which took more than a year and half from inception to creation.

Not only is this model used for sharpening young maintainer’s skills, it is also being displayed at air shows around the U.S. and Canada to spread the remotely piloted aircraft message.

“This is a great opportunity for our Airmen because as a combat unit, they only see the aircraft here and downrange and we haven’t had many temporary duty assignments in the past,” Eric said. “Getting this built for training and air shows provides hands-on development and opportunities for our Airmen to interact with the community in a way they couldn’t before.”

The aircraft model started out as the third MQ-9 prototype from the General Atomics production line prior to the Air Force’s acquisition of the Reapers. Once the Reapers were in Air Force inventory, the prototype was deemed ineffective due to being outdated and was designated a training aircraft.

“All of the serviceable parts from the prototype were repurposed in other combat aircraft which left us with an empty shell,” Eric said.

This prototype that’s been primarily used for training has far exceeded its original life expectancy, thus making it a feasible solution in becoming the first MQ-9 model for display at air shows.

“The wing is using it to champion RPA airpower by showcasing our capabilities at different venues,” Eric said. “Ultimately, we get to go out and be good Air Force and RPA ambassadors because each kid we interact with could be our future successor. All in part, because they saw the MQ-9 at an air show and wanted to join the Air Force.”

This model serves as a permanent display and eliminates the need to remove an operational aircraft from training or combat rotation, which makes it easier for maintainers and support personnel in terms of assembly and transportation.

“We only need a fraction of the equipment and manpower compared to an operational aircraft,” Eric said. “Overall we save about eight hours on the build time with less manpower.”

Having the ability to show a real-life copy of the MQ-9 minimizes operational security risks as sensitive parts are removed for public viewing.

“The lower antenna, the Multi-Spectral Targeting System and the propeller blades are all 3D printed,” Eric said. “If these parts broke, we would just need a little glue rather than millions of dollars to fix them.”

Today, this MQ-9 model has been exhibited at five air shows in the last 7 months to educate the general public about the unique mission and capabilities of the Reaper, reaching more than 500,000 people.

“As the MQ-9 Reaper enterprise grows, raising public awareness is an important part of our mission,” said Col. Julian Cheater, 432nd Wing/432nd Air Expeditionary Wing commander. “We will continue to empower Hunters, I’m so proud of our Airmen for leading the charge of innovation in the RPA community.”