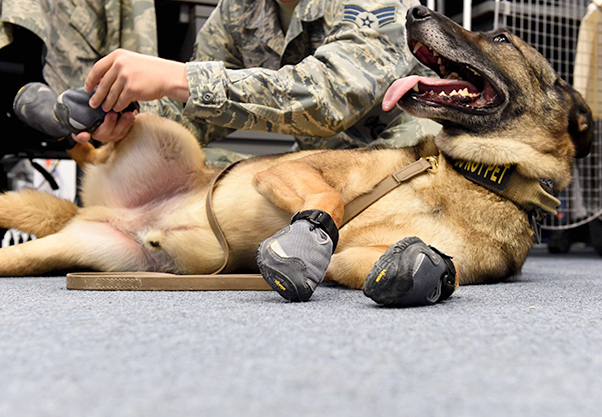 Jimy, a 799th Security Forces Squadron military working dog, get dog booties placed on his paws Sept 1, 2017 at Creech Air Force Base, Nev. The 799th SFS dog handlers use these booties during inclement weather conditions and harsh terrain to protect the dog’s paws.

These weather conditions are frequent for Creech and can be dangerous for our Airmen, especially for our four-legged ones, the military working dogs.

“If you can’t touch your hand to the ground and keep it there for more than three seconds because it’s so hot, it’s going to be even worse for the dogs,” said Tech. Sgt. Anique, 799th Security Forces Squadron working dog handler.

The military working dogs at the 799th SFS Kennels are an integral part of ensuring the security of Creech AFB. The dogs and their handlers are responsible for enforcing the law and keeping our Airmen safe.

In order for them to accomplish all of this, the Air Force has provided the 799th military working dogs with the equipment they need to succeed.

“They’re called boots,” said Senior Airman Nicholas, SFS working dog handler. “They have the Vibram® soles just like our boots and they protect the actual padding of the dogs’ paw. So, in rough terrain or if it’s hot outside, their padding has protection.” 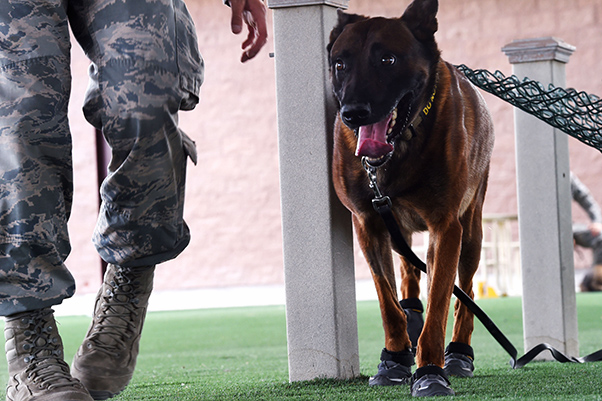 Though the use of the booties is at the handler’s discretion, keeping their paws protected from the desert ground is vital to the success of the mission. If the dogs become more focused on the pain caused by the hot ground, it can deter them from the true objective at hand.

The booties enable the dogs to perform in a variety of environments where weather conditions or rough terrain would interfere with their mission.

As part of their training, the handlers get the dogs used to this gear by taking them through an obstacle course and allowing them to practice wearing them both on and off duty.

Military working canines must accompany their handlers on foot patrols, perform searches and ensure the safety of everyone on base. For these tasks, complete attention is a necessity.

The booties make that level of concentration possible in almost any condition. They protect a dog’s pads, paws and nails to allow for full performance in whatever they are expected to do. 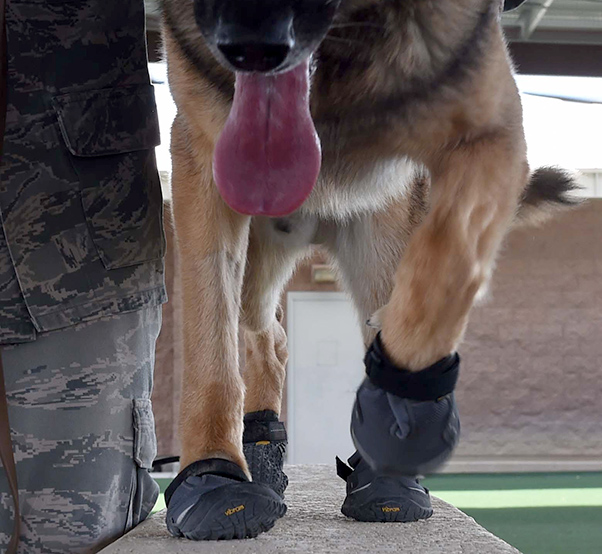 Toby, a 799th Security Forces military working dog, goes through the courses to get familiar wearing the booties Sept 1, 2017 at Creech Air Force Base, Nev. Familiarizing the dogs with the booties is important , so that the they can focus on the mission at hand.