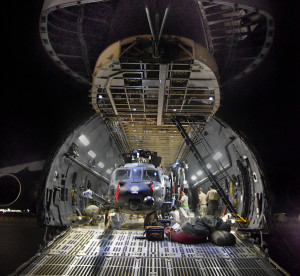 Midafternoon Sept. 8, the 66th Rescue Squadron and 823rd Maintenance Squadron assigned to Nellis Air Force Base, Nev., received a call from the U.S. Northern Command to ready teams to support FEMA search and rescue efforts in the Florida Keys following the aftermath of Hurricane Irma, which later made landfall Sept. 10.

“One life is worth saving,” said Staff Sgt. Nicholas Borresen, 23rd Maintenance Wing quality assurance inspector. “If we have the funds available, the people available to do it, why not?”

Borresen is familiar with the preparation needed to perform a rescue mission. He was also a crew member for Operation Tomodachi, a search and rescue mission to help the victims of the tsunami that struck Japan in 2013. He is confident Team Nellis will be just as effective in the Keys.

“Everybody we have going right now is the best of the best,” said Borresen, who is responsible for inspecting the maintenance on the aircraft. “We should not have a problem having these aircraft perform for us. We provide safe aircraft for operators who can, in turn, go out and save lives.”

As it takes a village to raise a child, it takes several units to get the aircraft in the task force on their way to Florida. Training was put to the test as the 823rd Maintenance Squadron fought forces out of their control — as the clock ticked, nature roared from above.

For Jones, this was more than just an Air Force mission. 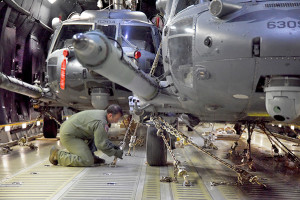 “Once we get wheels on the ground, it’s going to be our priority to coordinate with those guys as they will be our eyes and ears on the ground,” said Capt. Keoki Kimzin, a combat rescue pilot assigned to the 55th Rescue Squadron at Davis-Monthan Air Force Base, Ariz., and leading one of the four-man teams assisting with civilian evacuations and possible medical treatment. “They will allow us to integrate with them to do our job more efficiently as they are the experts in the area.”

In less than 18 hours of the call, the C-5 was packed with three HH-60 Pave Hawk helicopters, tools and rescue equipment ready to take flight.

“We always say, ‘Practice like you play,’” said Best. “It’s rough because it’s somebody’s worst day when they need us, but it’s what we’re here for – it’s what we live for.”

This is the second call Nellis has received to support USNORTHCOM’s mission to assist lead federal relief agencies in helping those affected by recent hurricanes, in an effort to minimize suffering while continuing its mission of defending the homeland.

Thirty-one Nellis members assigned to the 99th Air Base Wing, 58th Rescue Squadron and the 23rd Wing were requested to assist with the Hurricane Harvey response efforts in southeast Texas. These members were tasked with providing humanitarian relief as well as command and control to military forces assisting FEMA, state and local authorities with the relief efforts.  The base stands ready to provide additional support, should it be requested.