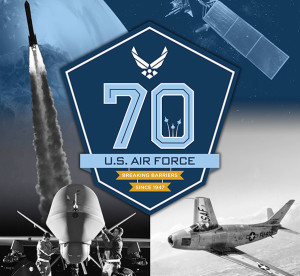 Celebrating the 70th birthday of the U.S. Air Force, President Donald J. Trump and First Lady Melania Trump saluted airmen and their families during their visit Sept. 15 to Joint Base Andrews in Maryland.

The First Lady opened the event by thanking “the brave men and women who wear the noble uniform of the U.S. Air Force for having us here today.”

She added, “I had the privilege to visit with some of your wonderful children at the youth center here on base. I enjoy our time together, getting to know them, and want to thank everyone who helped make this visit possible.”

Military children from all service branches “should be enormously proud because your mom or dad is a true American hero,’ the First Lady said. “In the wake of two devastating hurricanes, the world has witnessed your courage and compassion, and you have made every American proud.”

The First Lady told the airmen that she and the president “are grateful for your service.”

She added, “I also want to take a moment to recognize the families of those who serve. You endure the time apart, are expected to move when new orders come in, and face the uncertainty that came in the times of need. This kind of lifestyle requires its own kind of courage, and your sacrifices do not go unnoticed or unappreciated. Thank you.”

The First Lady then introduced the president.

‘The greatest Air Force’
The president said he was honored to visit with the airmen and their families, noting the U.S. Air Force is “the greatest air force on the face of this Earth — by far.”

The commander in chief also said that he spoke with British Prime Minister Theresa May, this morning “and relayed America’s deepest sympathy” for today’s London terrorist attack “as well as our absolute commitment to eradicating the terrorists from our planet.”

America and its allies will never be intimidated by terrorists, the president said.

“We will defend our people, our nations, and our civilization from all who dare to threaten our way of life,” he said. “This includes the regime of North Korea, which has once again shown its utter contempt for its neighbors and for the entire world community.”

The president saluted the “capabilities and commitment” of the Air Force and its people, adding that he’s “more confident than ever” that U.S. options in addressing the North Korean threat “are both effective and overwhelming.”

The president then discussed the ongoing recovery efforts for Hurricanes Irma and Harvey.

“I visited Florida yesterday, where the American people have once again shown the world how resilient, strong, and truly united we are,” he said. “We’re going to help our fellow Americans put their lives, their homes, and their communities back together because when Americans are in need, Americans pull together.”

The commander in chief added, “And we know, we can always count on the courageous members of our nation’s military to be there every step of the way, just like more than 400 Air Force medical personnel who have deployed to Florida to help care for the sick and the injured.”

“To the men and women who proudly wear the Air Force uniform, who keep our country safe, and who fill our hearts with pride, thank you for your service and devotion to America. Thank you,” he said.

For seven decades, America’s Air Force “has pushed the boundaries of science and technology, helped restore peace and stability to troubled lands, and kept Americans safe from those who threaten our very way of life,” he said.

And, “nothing inspires more confidence in our friends or strikes more fear in the hearts of our enemies than the sight of American warplanes on the horizon,” the president said. “You patrol the sky, protect the homeland and deliver American justice to anyone who dares to threaten our people.”

The president said America’s Air Force “has advanced from the earliest wooden biplanes, to the high-tech unmanned aerial vehicles, to the awesome power and stunning beauty of the F-35, B-2, F-22, — and I saw a lot of them today — the F-15, the F-16, the F-18, I don’t know which one I liked the most.”

America’s Air Force aviators “have given America total dominance of the air and space, no matter where we fly,” he said. “Now when our enemies hear the F-35’s engines, when they’re roaring overhead, their souls will tremble and they will know the day of reckoning has arrived.”

The Air Force “was born during a time of monumental change and uncertainty in the world,” the president said. “Unconditional victory in World War II had come at a terrible price. Millions of lives had been lost, empires had collapsed, and much of Europe laid in ruin.”

During the ensuing Cold War, the threat of global communism emerged from the void left by defeated foes,” he said. “And the free nations of the world, once again, looked to the United States to secure the peace. It was at this crucial moment that America established the Air Force as a separate military service and a truly great military service.”

From the Berlin Airlift in 1948, through air operations during the Korean War, the Vietnam War, the Gulf War and the wars in Iraq and Afghanistan, he said, “American airmen have proven that they have no equal in courage, capability, or commitment.”

The president added, “You are the ones who own the sky. You are our greatest weapon of all. In the last 64 years, American ground forces have not lost a single life to an enemy air strike — pretty amazing — and that is truly a testament to the strategy and skill of American airmen and the essential role you play in our national defense.”

As the commander in chief, the president said he’s “committed to keeping the United States’ military the best trained, best equipped, and most technologically advanced fighting force on the planet.”

One of his key tasks is rebuilding the U.S. armed forces, the president said.

“Congress took an important step this year by heeding my call for a $20 billion increase in defense spending, and we’re going to be doing even much more than that,” he said. “But the servicemen and women who defend our nation with their lives deserve the predictable and consistent funding that will help them win quickly and win decisively.”

“It is equipment like you’ve never even thought of before,” he said. “There is nobody in the world that will have anything even close” to U.S. military equipment.

America’s armed forces “have endured continuous combat for the past 26 years, yet despite this, the number of airmen on active duty has dropped by one-third since the 1990s, and we’ve cut more than half of our fighter squadrons,” the president said. “Terrible. That is why I’m calling on Congress to end the defense sequester once and for all and to give our military the tools, training, equipment and resources that our brave men and women in uniform so richly deserve.”

“Each of you is fulfilling your duty to America, and now government must fulfill its duty to you,” the president told the airmen. “We will stop delaying needed investments in our readiness, and we will renew our commitment to the patriots who keep America safe.”

‘Proud legacy of service’
He added, “In so doing, we will continue the proud legacy of service that each of you has inherited, a legacy built over the generations by legends like Yeager, Wagner, Rickenbacker, Boyd, Grissom, and Schriever — the heroes who broke barrier after barrier to push America farther. And they really did. They broke so many different barriers — they went farther, faster, and they always went on to victory.”

Like America’s air heroes of yesteryear, “each of you is a living, breathing symbol of our great country, the United States of America,” the president said. “The characteristics that define the Air Force aviator — boldness and bravery, action and instinct, power and grace — are woven deep into the American spirit and have defined our people since our nation was founded.”

The president said the legendary Air Force General Robin Olds immortalized those attributes when he said fighter pilots possess an attitude and display cockiness and aggressiveness.

“And I just met a lot of these folks,” he said.

The president added, “They’re truly, truly competitive. But there’s something else — there’s a spark. There’s a desire to be good, to do well in the eyes of their peers.”

‘The sky is never the limit’
America “forever will be a nation of pioneers and patriots, risk-takers and renegades, aviators and astronauts,” he said. “We crave adventure and achievement, exploration and enlightenment. We carved out a home in the New World, gave birth to the modern world, and we will shape tomorrow’s world with the strength and skill of American hands. Because for America — the sky is never the limit.”

And, the U.S. Air Force “will remain the most awe-inspiring flying force ever known to man,” the president said. “Like every part of our military, the Air Force is born from the will of our people — to search, to explore, to reach new heights. It is the people’s will that you reflect and their power that you project to every single corner of the globe.”

Earlier this year, the president said he “had the honor of speaking with a great Army Air Corps and Air Force legend, Lt. Col. Dick Cole, the last surviving Doolittle Raider, and a true American hero.”

He added, “Like those who serve today, Dick Cole was a common American who answered to the call of duty with uncommon devotion. His place in the pages of history might have seemed unlikely prior to that fateful mission. He had never seen the ocean before boarding a ship that would take him halfway around the world. Neither he, nor anyone else, had ever flown a B-25 into combat from the deck of an aircraft carrier. Nor had we ever seen anybody to use a parachute before bailing out thousands of feet above the Chinese mainland.

“But he knew what his country needed, and what his duty required,” the president continued. “And there was no barrier that could stop Colonel Cole and his fellow Raiders from accomplishing their mission.”

That spirit of daring, devotion, duty and love of country that has defined the Air Force for the past 70 years “will lift each of you to new heights every day from this day forward,” the president told the airmen.

“There is no distance too far, no speed too fast, no challenge too great, and no height too high that will keep the United States Air Force — or the American people — from total victory,” he said.

The American people are eternally grateful for the service of their airmen, the president said.

“We will stand with you always. And never forget: I am always on your wing,” he said. “Happy 70th birthday to the United States Air Force. Happy birthday to everybody. We are so proud of you. Congratulations to each and every one of you. And thank you for keeping America proud, strong, safe, and free.”