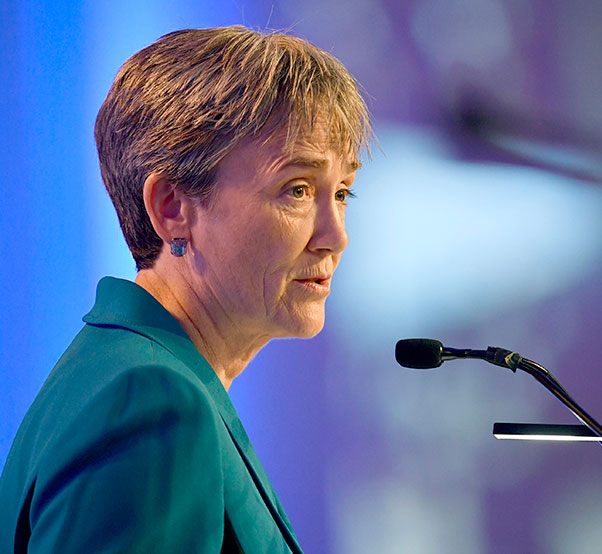 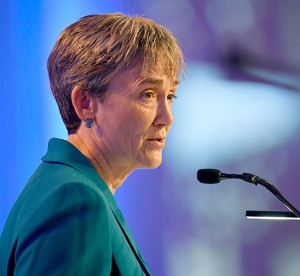 Wilson covered the Air Force’s five priorities, all driven by the needs of the nation.

“We have been doing too much, for too long, with too few and that has to change,” said Wilson. “We have to plan and prepare for the high-end fight.”

“The stark reality is the United States Air Force is too small to do all that the nation expects of it,” said Wilson.

According to Wilson, the past 26 years of constant combat operations has come at a cost to the Air Force’s personnel and equipment. The demand for what Airmen bring to the fight will only increase, and it is vital to take steps to ensure the readiness of the force.

“The greatest risk we’re facing here at home…is the risk of not having a budget,” said Wilson. “We put forward a budget that begins to restore the readiness of the force, so that we can win any fight, any time.”

That would be at risk if a budget isn’t approved, she added.

Readiness begins with people and we must continue to grow the force to perform current and future missions she said.

“Americans need to understand, low readiness for a crisis doesn’t mean we won’t go…what it means is fewer will come back,” said Wilson.

The Air Force is working on the acquisitions process to get items from the factory to the flight line efficiently and expeditiously in order to win the conventional and unconventional fight.

“Adversaries are modernizing and innovating faster than we are,” said Wilson. “We have to be able to evolve faster, to respond faster than our potential adversaries.”

With an increase of modernization over the next 10 years in the form of bombers, fighters, tankers, satellites and helicopters, it is paramount to harness the power of innovators and entrepreneurs within the Air Force, across the country and throughout the world.

“Innovation is the hallmark of the United States Air Force,” said Wilson. “From time to time it is important to refresh our science and technology strategy, to step back from the programs and problems of today and project 10 or 20 years into the future.”

Wilson announced the Air Force will conduct a 12-month Science and Technology review to update its research priorities and strategy.

Innovation not only happens in academic environments, but also out on the flight line where Airmen are doing the job every day.

“The chief and I are trying to put in place processes that are going to push authorities down to the lowest appropriate level,” said Wilson. “We’ve started to simplify Air Force instructions and policies so that we stop telling Airmen how to do everything, and tell them what to do instead.”

The Air Force will continue to lead and support the joint force in defending the U.S. by developing innovative leaders who can thrive in joint teams and develop strong military partnerships.

According to Wilson, a service doesn’t win on its own, and the Air Force’s allies and partners are friendly centers of gravity.

“Air and space superiority is not America’s birthright,” said Wilson. “We’ve earned it the hard way, and we are not going to give it up without a fight.”