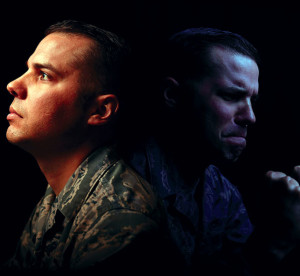 Charged with the safety of every American against all enemies, both foreign and domestic, military members are expected to perform in highly stressful environments.
Airmen deal with everyday stressors that come with wearing the uniform, and issues that arise both on and off the battlefield.

September is National Suicide Prevention Awareness Month, a time set aside to reflect on the importance of suicide prevention and encourage Airmen to be there for companions and fellow service members.

“These are things that effect the four resiliency pillars, the mental, the physical, the social and spiritual, and we all face them,” said Col. David Bissonnette, 432nd Wing/432nd Air Expeditionary Wing vice commander.

Green Dot, an Air Force training program, provides Airmen with the tools they need to safely intervene in situations of violence, stalking and suicide, while also allowing people to discuss different scenarios and possible intervention methods.

“Green Dot is more of an idea,” said Senior Master Sgt. Stephanie, 432nd Wing sensor operator and Green Dot instructor. “The idea of it, to me, is giving us tools to not be a bystander if something’s happening.”

The training sparks discussion on how an Airman should react when presented with a difficult situation before actually encountering them.

In addition, the training addresses personal ‘barriers’ and interpersonal factors that may prevent them from reaching out.

“Teaching people what to look for in others and helping them understand they can do something to help is refreshing,” Stephanie said.

These sessions let attendees know that it’s acceptable to ask for help for anyone struggling with mental health issues.

“I think everyone’s uncomfortable asking for help regardless of the situation,” said Stephanie. “Whether they’re having suicidal ideations or just a bad day, I hope people remember that it’s ok to ask for help.”

Airmen learn that stressors take on many faces and are sometimes hard to control in a fast paced military lifestyle.

“Family stressors, financial stress, work stress, divorce, separation, those things happen to people every day and we have to be able to say just because I need help today, doesn’t mean I’m not strong,” she said.

Accepting that idealism was something Stephanie had to learn last year after dealing with the sudden death of her brother, who passed away unexpectedly after a car accident.

She reminisced on their close relationship and stated that although he was not only a beloved brother, but also the favorite uncle of her children.

“It was a Sunday morning, I get a phone call from a friend of his telling me what had happened and I remember very distinctively falling to the floor. I don’t remember what happened after that because I didn’t want to believe it,” Stephanie said.

She recalls the support that she received from her friends and Air Force family.

“I called my good friend and wasn’t really sure of what I said, but they were at my house within minutes, and within an hour or two the rest of my leadership was there,” she explained.

Although this was the most difficult thing she’s had to deal with she recalls how she refused to allow it to mentally cripple her.

“I thought if I could just blank everything out, it would help me get through it,” she said. “After three months of trying to find my way, it wasn’t until my 5-year-old son asked me about dinner because I hadn’t prepared it yet, when I said enough.”

Stephanie recalls gathering herself and refocusing her efforts on getting the help that she needed for herself and her family.

“I found the strength through my kids and family that evening and the next day I was at mental health getting counseling.”

Airmen are reminded that being fit to fight extends beyond being physical endurance; it includes having mental cognizant strength in order to carry out the mission.

“I think for anyone in any walk of life, mental health is incredibly important. If you’re not in a great state of mind, it takes much more energy to focus and execute whatever task you’ve been asked to do,” said Bissonnette. “Making sure people are in a right state of mind facilitates everything.”

Since reaching out, Stephanie shares her story at Green Dot trainings in hopes of helping those who may be experiencing similar problems.

“For anyone feeling hopeless, there is always a way out and if I can be a voice to remind people of that on a regular basis then maybe that’s my purpose on this earth,” said Stephanie.