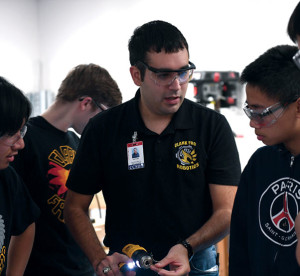 Service is defined as unrelenting devotion to one’s duty to his or her country. It’s one of the core values instilled into every Airman in the U.S. Air Force today. However, for one Airman, it also means giving back to his community.

For the last eight years, Capt. Victor, an MQ-9 Reaper pilot assigned to the 17th Attack Squadron, has spent most of his days off volunteering with science, technology, engineering and math programs centered on mentoring the youth and hopefully inspiring the next generation of scientists and engineers.

“The Great Minds in STEM organization is a very large Engineering organization for Hispanics and they aim to do a lot of the same things that I am doing in the community, which is to inspire youth, especially underrepresented Latino youth, to pursue engineering in math and science professionally and at the university level,” said Victor.

Victor began his endeavor while he was in high school and has personally mentored hundreds of students. He’s kept up his involvement throughout his time serving and his contributions have spanned across two Air Force duty assignments.

“More recently, the last four years, I have probably individually mentored around 70 or so students and reached dozens more in discussions,” said Victor. “The individual mentorship is really where students succeed. That constant mentorship interaction and leadership can help mold them into the professionals we need for the future.”

“I went to a title one school and there were a group of people who were in this program called the National Hispanic Institute,” said Victor. “NHI is a national organization and they identify [Hispanic] youth to teach them the basics of speech, debate, mock trials and public speaking and through that teach them the professional skills that will aid them through life.”

Reflecting on the opportunities he had in high school, he wanted to use his own experiences as a lesson for young students who may be having second thoughts about pursuing higher education.

“When I went to college, I was fortunate to be accepted to the Air Force Academy and while there, I saw that we had so many amazing resources at the university and what I wanted more than anything was to share that with the community,” he said. 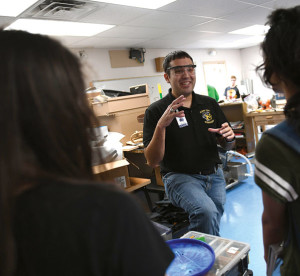 Capt. Victor, 17th Attack Squadron MQ-9 Reaper pilot, instructs a couple of robotics students, in Las Vegas, Sept. 7, 2017. Victor spent most the last eight years of his life getting involved with the community’s youth, and promoting the importance of higher education.

Although the organization helped shape Victor’s professional development and outlook, the Houston native explained that despite being used to living and working in a drastically diverse environment, his experiences at the academy were culturally limited at the time.

“When I went to college for the first time, I was somewhat aware that I was actually a minority. What I found was that many people weren’t very well versed in the other cultures,” Victor said.

Victor explained that he, initially, felt as if there were multiple Americas that he was living in, one being the America where people spoke Spanish, watched Spanish television, listened to Spanish music and understood the culture. The other was a place where certain individuals thought the Spanish influence wasn’t even a part of America.

“People thought that I was foreign, but I am sixth generation Texan and my grandfather fought in World War II,” said Victor. “We’ve been in the United States a long time and I think that many different ethnic groups, for whatever reason, have been segregated throughout American history.”

Despite his early experiences, Victor hopes that by targeting the next generation of thinkers and filling the culture gap, he can expand on diversity within the STEM professional fields.

“Victor has definitely pushed me out of my comfort zone by making me apply for scholarships, volunteering and doing things that I wouldn’t normally do,” said Chiara Crawford, a student mentor and member of a local robotics team.

Crawford expressed her appreciation for Victor’s involvement with the team and stated that because of him, she is able to expand on her personality and character.

“I’m very grateful to them [Victor and other team leads] because, I don’t think we would’ve been where we are without them,” said Crawford.

Victor enjoys keeping in touch with previous students and observing their future impact with their STEM related occupations.

“My students have been fought over by colleges who continuously throw money at them to entice them to choose their school over a rival,” Victor said. “They’ve been recruited to places like MIT. The first ones I mentored have gone on to start their careers in internships. Some are looking to serve in the military and others will be engineering our energy needs for the future.”

Hispanic Heritage month concludes on Oct 15, but Victor’s mission is far from over and he encourages others to contribute to their community.