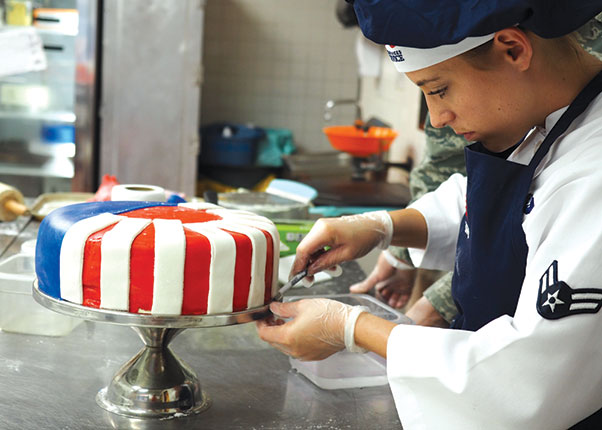 The Crosswinds Dining Facility at Nellis Air Force Base, Nev., hosted a cake-cutting ceremony at 11 a.m. Sept. 18 to celebrate the 70th anniversary of the U.S. Air Force, with this year’s theme of Breaking Barriers Since 1947.

Cook joined Team Nellis just days before the Air Force’s 69th anniversary. Shortly after arriving, the baker position at the dining facility became vacant. As a self-taught baker, Cook excitedly jumped at the opportunity to showcase her skills.

“I presented the staff with some of my baking goods and asked if I could take the baking role here,” said Cook. “Sure enough, I got what I asked for and couldn’t be more grateful.”

Cook reaffirmed her talent baking the Air Force birthday cake days after arriving in 2016, so, naturally, she was selected to bake this year’s cake. As team lead, Cook felt the pressure of the task, as this baking requirement held a higher level of interest than baking desserts for the dining facility serving line.

“My normal baking duties don’t involve this much work,” said Cook. “Also, this cake will be shown in front of my leadership and peers, so it adds to the pressure and my drive to make my cake that much more spectacular.”

Heading into the birthday weekend, Cook and her team broke up the massive project into three steps: baking, icing and decorating. First, the team baked the individual vanilla cakes to create the three stacked tiers and placing them in the cooler to chill overnight. A tiered cake for more than 50 people takes more than hard work and creativity. 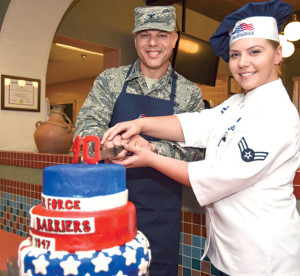 “For this cake, we used 10 pounds of cake mix, six eggs, 1 ½ cups of oil, five pounds of confectioner’s sugar and two-and-a-half pounds of butter for the frosting,” said Cook.

Second, Cook and Markos iced each cake with a few layers of buttercream icing, cooled them and wrapped them with red or blue fondant. In addition, they rolled out white fondant to create stars and stripes for the second layer.

“We chose to make homemade fondant for better quality,” said Cook. “We used seven pounds of confectioner’s sugar and two pounds of marshmallows.”

Finally, McGovern spent two hours meticulously inscribing edible banners to wrap around the layers of the second tier as well as molded a 70th anniversary topper for the top tier.

“There aren’t second chances if I mess up, so I have to make sure I get it right the first time, every time,” said McGovern.

Once the layers of cake were stacked, the team polished the fondant with water to give it a shine. The bakers had created a cake worth devouring.

“I came into the Air Force with the intentions of making an impact in my job and in the lives of the people around me,” said Cook. “I absolutely love my job! It makes people’s short time here more enjoyable and – who doesn’t like cake and desserts?”

After a few words, Col. Matthew Boschert, 99th Mission Support Group commander, began the birthday celebration with an Air Force tradition. Airman 1st Class Rebecca Johnson, a chef assigned to the 99th FSS, who was also celebrating her one-year anniversary in the Air Force was asked to cut the first slice of the cake before passing it out to attendees.

“There are some bakers out there that could learn a few things from these Airmen,” said Airman 1st Class Andrew Sarver, photojournalist assigned to the 99th Air Base Wing Public Affairs and celebration attendee. “That cake brought tears to my eyes and joy to my heart.”