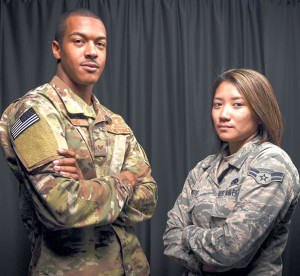 Staff Sgt. Dondre Wood and Airman 1st Class Korie Morimoto had tickets to the Route 91 Harvest Festival Oct. 1. Little did either of them know, the events that would transpire over the next hours would lead to the largest single shooter massacre in modern U.S. history.

“We were going between the concert and casinos until Country Music Singer Jason Aldean was getting ready to play,” said Morimoto. “We returned to the concert to watch him, but we were only a few songs in when everything turned to chaos.”

Wood said there was a lot of confusion after the first shots were fired.

“Initially we heard what sounded like fireworks,” said Morimoto. “I looked around, but didn’t see anything. Then, it started again, and that’s when I felt something kick up and hit my leg. That’s when I realized we were getting shot at, and the gravel was flying everywhere from the ricochet.”

It wasn’t until the second barrage of bullets that Wood had a full understanding of what was going on around him.

“I moved Morimoto to my left to shield her from where the shots sounded like they were coming from,” said Wood. “She’s my coworker, but more importantly, a mother of two. I put my back to the gunfire that way I would take the brunt if, God forbid, anything came our way.”

“All I heard were people screaming and the continuous rounds hitting the ground around us,” said Morimoto. “All I thought to myself was I can’t get shot. I can’t die today. I need to survive for my kids.”

Morimoto and Wood sprinted to the nearest exit and jumped into their car. Seconds later, the back doors swung open.

“About half a dozen complete strangers were frantically pleading for a ride,” said Wood. “I definitely wasn’t going to turn them away. I had everyone pile in, and I drove them as far away from the scene as possible.”

“There was a lot of adrenaline rushing through both of us during our escape, but it wasn’t until we got into the car with all these extra people that it hit me – we just survived an active shooter situation,” said Morimoto.

“Once everyone jumped in the car, they were just panicking,” said Wood. “A lot of them were calling their parents or their friends to let them know they were OK, but there was still a lot of confusion.”

Morimoto immediately helped calm the passengers by lending her phone to one of the women whose phone’s battery had died earlier in the evening.

“She called her mother, crying uncontrollably, telling her how much she loved her, what had happened and that she was safe and taken care of,” said Wood.

“We never got these strangers’ names,” said Morimoto. “All we focused on was getting out of there and getting everyone to safety.”

Once they reached safety, Morimoto and Wood had a chance to reflect on what had just happened.

“I keep going over how our actions potentially saved not just our lives, but the lives of complete strangers who needed to get to safety,” said Morimoto. “Had we initially been just a few feet in a different direction, the outcome could have been a lot worse.”

“We train for active shooter drills, but we never think we’ll be in that situation,” said Wood. “The moment the shots started coming in, I reverted back to that training and knew that in these situations — it’s fight or flight.”