Since 8 a.m. Oct. 2, the Nellis Disaster Mental Health team has provided services for those directly and indirectly affected by the largest single shooter massacre in modern U.S. history at the Las Vegas Route 91 Harvest Festival Oct. 1.

“It’s common for people to wait 48 to 72 hours after a traumatic experience before they realize they want to speak to somebody,” said Lane. “It has been a few days, and we are starting to see an influx of people coming in now that they are starting to process everything they just went through.”

“The Nellis Disaster Mental Health team is a collaborative group meant to bring the synergy of all the Airmen support groups together,” said Lt. Col. Dwayne Jones, 99th Air Base Wing chaplain. “From mental health and the behavioral health optimization program to chaplains and the Airman and Family Readiness Center, we are able to help our Airmen in times of crisis, such as these.”

Although the Team is providing professional help, any Airman can be a good Wingman. Most help can be provided without saying a word.

“Whenever that person is ready to talk about what they saw and what they heard, it’s important for us, as a Nellis, Creech and (Nevada Test and Training Range) community, to be here for them,” said Jones. “However, sometimes there’s the proclivity to extract information from the individual too early, and that’s not going to help them heal.” 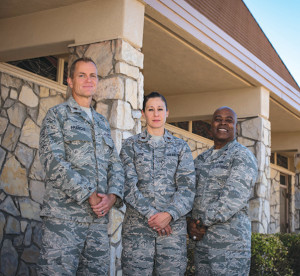 “Telling somebody that everything is going to be OK is something you want to avoid,” said Lane. “There is so much of the unknown that you want to avoid making promises. Instead, let them know that you are there for them, that their response is OK, and listen when they decide they want to talk.”

“During this time, keep an eye on your Wingmen and make sure they are maintaining their normal routines,” said Jones. “Even if they weren’t at the concert, they may know somebody or just feel the secondary and tertiary effects of what happened miles down the road from them.”

“People are naturally resilient,” said Lane. “Not everyone involved will even need to see Disaster Mental Health, but it’s important to know that not only are we here for them, but that their friends, families and coworkers are as well.

“Every experience we go through, whether it’s good or bad, big or small, changes us,” said Lane. “Some for the better and some for the worst. But, it’s that piece of post-traumatic growth that although it may change us, it doesn’t have to define us.”