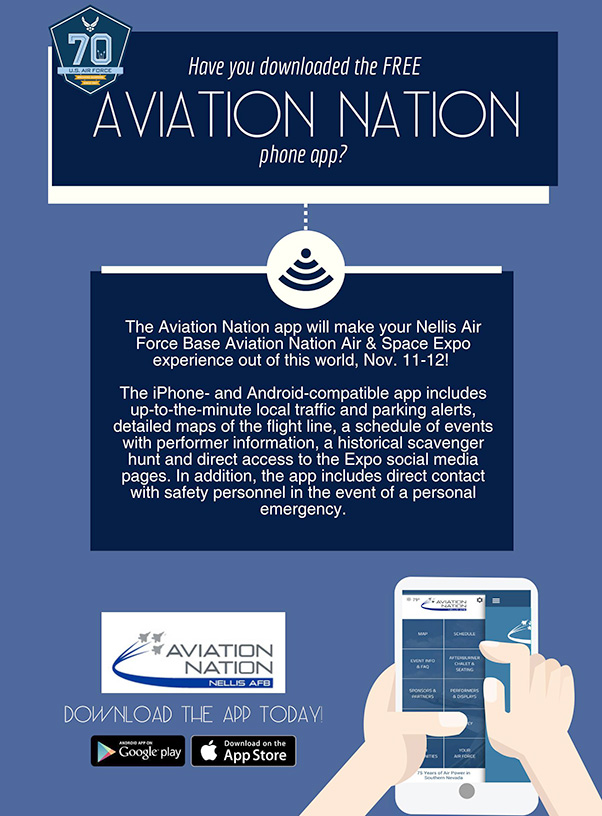 The Nellis Air Force Base, Nev., Aviation Nation Air & Space Expo is scheduled for Nov. 11 and 12, and the base is prepared to host more than 400,000 guests over the two days.

The question is whether you are prepared.

Improve your chances of enjoying the Expo by downloading the 2017 version of the Aviation Nation app, which officially launched Sept. 30.

There are several reasons to download the upgraded Aviation Nation app, such as a list of emergency phone numbers, a schedule of performances and weather information, but the top five new features could reduce road rage, increase your realm of knowledge and extend your social reach.

For those new to Expos, formerly referred to as air shows, free public events tend to bring challenges. Locally, Nellis AFB is nestled in North Las Vegas, just 15 miles from the Las Vegas Strip. The close proximity to “The City That Never Sleeps” brings thousands of new guests to local area daily. With the addition of the base’s largest annual public event, the roadways can quickly come to a screeching halt.

Eventually, you and the other guests will move from the roadways to The Las Vegas Motor Speedway, where parking attendants will direct you to an open parking lot. With thousands of your closest friends, you patiently wind your way through the security checkpoint before boarding one of 100 buses headed to the event. Once at the flight line, your senses will become inundated with the smell of jet fuel and fair food, the sound of jet noise overhead and the sight of a seemingly endless crowd of people.

Try to resist curling up into the fetal position and, instead, turn to the Aviation Nation app for help. From the planning to execution phases, the app will keep you calm and relaxed.

#5: Traffic and Parking Alerts
The car is loaded, and you set your GPS app for the Speedway fully expecting a clear shot from point A to point B. That was your first mistake. Had you downloaded the Aviation Nation app, you would have received traffic alerts and been rerouted.

Let’s say you finally arrive at the Speedway only to drive the length of the red parking lot without one open parking space. Now, you must repeat that dance at the blue parking. Had you downloaded the Aviation Nation app, you would have received an up-to-the minute parking notification to prevent an unnecessary trip to the red parking lot.

#4: Detailed Maps of the Flight Line
You made it to the flight line and are ready to experience the vastness of Aviation Nation, but where do you begin? You begin wandering aimlessly from one end of the flight line to the other, visually absorbing the sights. Sure, you met your daily steps quota, but did you gain any knowledgeable about the Air Force mission?

Probably not. Had you downloaded the Aviation Nation app, you would have had a detailed map of the flight line, complete with landmarks, areas of interest and points of reference if you find yourself lost. Now, you can plan your visit before arriving to ensure you hit the major attractions.

#3: Aircraft Beacons
You arrive at a large aircraft with interesting features. You take a step inside and observe hanging wires, bucket seats and lots of buttons. You walk out, thinking, that was pretty cool, but when you’ve seen one plane, you’ve seen them all. Later, your friends ask about your day and all you can say is, “Well, there were lots of planes and jet noise.” Had you downloaded the Aviation Nation app, you could scanned each aircraft beacon, placing knowledge in the palm of your hand to include facts, photos and links to online videos of the aircraft in action. Perhaps, your contributions to the conversation with your friends would convince them to see the show firsthand.

#2: Historical Scavenger Hunt
Two hours into your visit to the Expo, you can’t decide what to see or do next. The sights and sounds are overwhelming your ability to make a decision. Completely frustrated by your search for answers, you leave the event prematurely. Had you downloaded the Aviation Nation app, you could have refocused your attention by participating in the Aviation Nation historical scavenger hunt. The predetermined landmarks weave guests through the chaos, directing their eyes on the checklist items and rewarding them for their finds. By the end of the hunt, you could feel more relaxed, more knowledgeable and more engaged with the sights around you.

#1: Bragging Rights on Social Media
It’s a great visit, but hours after the event, you realize you didn’t take a single photo. In the realm of social media, your day never existed. The laughter, smiling faces and moments of aww are all but forgotten. You try to explain to people the crowd size, the sounds of the jets zooming through the air or the vastness of the flight line, but your hand gestures just aren’t doing the trick. Had you downloaded the Aviation Nation app, you could have shared those moments via the Social Media tab. Let’s say, you take a selfie as the Thunderbirds are flying over your head. Imagine being able to share that moment with every attendee at the event. Photos labeled with #AviationNation2017 will be featured on all the large screens on the flight line as well as shared on all of Nellis AFB’s social media platforms. Guess who else is in attendance at the Expo – local media. Before you know it, your photo has not only been added to your online scrapbook, but has gone viral online.

If you want to make the most of your Aviation Nation experience, take the three minutes to download the Aviation Nation app for your iPhone or Android prior to the event via the Apple store or Google Play store.