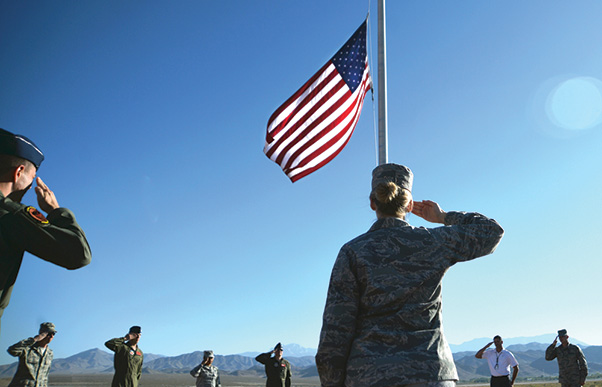 After the deadliest mass shooting in U.S. history, the Las Vegas community was left saddened and distraught, but not broken.

Airmen from Nellis and Creech Air Force Base sprang into action to help on the domestic battlefield, doing all they could to help victims, their families and their beloved community.

Minutes after the shooting, Airmen alongside fellow veterans, helped by performing Self-Aid and Buddy Care on the scene. Nine United States Air Force trauma surgeons reported to University Medical Center in downtown Las Vegas and others raced to donate blood.

Many personnel who attended the concert rallied together to help and aid those who were injured during the attack. Some who heard the news in the early morning hours took immediate action. 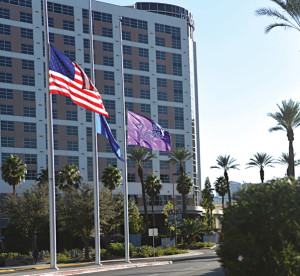 The Las Vegas convention center displays its flags at half-staff in the wake of the tragic Las Vegas shooting Oct. 3, 2017. Flags across the United States have flown at half-staff since the shooting took place to respect the 59 lives that were lost Oct. 1, 2017.

“Las Vegas is more than just lights and gambling,” said Tech. Sgt. Lloyd, NCO in-charge of the 432nd Wing protocol office. “It is a community. I felt that the best way to show my support was to help in any way possible, which was giving blood as soon as I could.”

Thousands of people reported to blood donation facilities across the city.

For others, the long night began just after shots ended as more than 520 victims were transferred to nearby hospitals to receive lifesaving treatment.

“Our surgery residents were there caring for these patients throughout the night and are currently caring for them,” said Maj. Charles Chesnut, general surgeon with the 99th Medical Group.

Airmen, spouses and community members alike have been inspired to contribute through every outlet that is available to them.

“As we delivered to some of the hospitals, you could see people that were waiting in the emergency rooms,” said Shannon Janelle, a military spouse who facilitated donations for the victims of the shooting. “As we dropped things off we could see the fear and the pain in their faces. You could tell that they didn’t know what to think or do or what to say.” 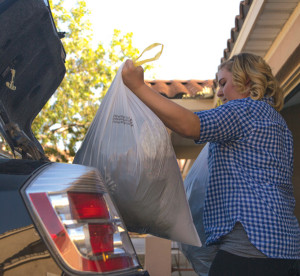 Shannon Janelle, a military spouse, loads the trunk of her car with donations from Nellis and Creech Air Force Base families at her home, Oct. 3, 2017. Janelle has not only delivered donations to various collection facilities in Las Vegas from Nellis families, but also volunteered her time at locations such as the Ronald McDonald House.

Blood, clothing and food donations poured into nearby hospitals, support facilities and first responders’ offices. The Air Force and Las Vegas community contributed so much support that many locations have run out of room to accept supplies.

After such a devastating event, Las Vegas is facing a long road to recovery and will need continued support in order to heal.

“We are committed to supporting the victims, our local community, Airmen and families affected by this tragedy,” said Cheater. “This is our community, we remain strong and are united.”