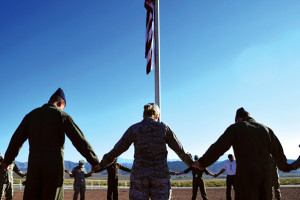 Members from the 432nd Wing/432nd Air Expeditionary Wing gather together for a moment of silence to respect the victims of the recent Las Vegas shooting Oct. 5, 2017, at Creech Air Force Base, Nev. The United States Flag stood at half-staff in remembrance of those who tragically lost their lives.

Suffering from shock, disbelief and sometimes the feeling of numbness, individuals impacted by a traumatic experience should receive help from trained professionals 24 to 72 hours after the initial crisis impact.

Hours after the Las Vegas tragedy, member of Creech’s Human Performance Team and Nellis Air Force Base trauma teams made themselves available to Airmen and their families.

“My wife and I were watching online when the story broke,” said Capt. Henry, 432nd Wing chaplain. “We watched as they reported and realized the impact the event would not only have on our city, but our nation.”

“We sat down the morning after and developed an action plan to support the members of Creech and their families,” said Maj. Richard, 432 WG operational psychologist. “We developed a two-prong plan to be here [at Creech] and in Las Vegas, so families didn’t have to drive to receive help.”

Although the HPT is designed to take care of Airmen and families through motivated, innovative, and trained warriors prepared for tomorrow through physical, social, spiritual and mental readiness; the aftermath of the tragedy was new territory.

“It was a tough one to deal with in this situation; the goal is to be there to listen and let them tell their story to hopefully help them make sense of everything and get some control back in their lives,” he said. “Some need hugs, some are more matter of fact, but it’s about meeting them where they are and seeing where they are at.”

Richard continued to say they remain committed to care in whatever way they can and offer around the clock support to anyone who needs it.

“We treated a number of both active duty members from Creech and Nellis and their families,” said Richard. “Treating them this time was different because it was up close and has affected everyone personally.”

There is no one road to recovery.

“People have needed someone to be there,” said Henry. “Some just need someone to hear their pain and sorrow.”

Providing this essential support ensures members are given the best possible resources for coping.

“We stand ready anytime, anyplace, anywhere to combat our enemies, as well as to support our community and anyone who might need our help,” said Col. Julian Cheater, 432 WG/432nd Air Expeditionary Wing commander. “We are doing everything we can to support our Airmen, families, and community.”