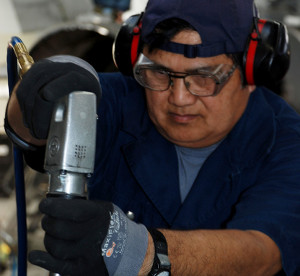 The F/A-18 Hornet fighter has served as one of the Navy’s most formidable weapons for over 25 years.

Originally manufactured by McDonnell Douglas, the legacy airframes (A-D models) were built with an intended service life of 6,000 flight hours.

Since the vast majority of legacy Hornets have exceeded their initial service lives, and to keep the aircraft mission ready, the Service Life Assessment Program (SLAP) was developed 15 years ago by the F/A-18 and EA-18G Program Office (PMA 265) in Patuxent, Md.

The goal of SLAP was to determine the feasibility of the airframe to surpass its service life; specifically analyzing the stress that catapult and landing cycles had on the airframe.

A test to determine airframe stress was created using actuators that were attached to an aircraft which underwent a 300-hour block of loads that included arrestments, catapults, and various 7-G maneuvers. The aircraft was tested to two life times.

Results identified areas of the airframe where symptoms of stress fatigue were more prevalent; subsequently, inspections targeting those points were established.

High Flight Hour (HFH) Program
A second phase of SLAP was created in 2005 to include flight-hour issues and dual seat landings of the B and D Hornet models. The results were the basis for stand-alone (B and D specific) and basic High Flight Hour (HFH) inspections designed to ensure operational safety of the aircraft beyond the intended service life, to 8,000 flight hours.

The basic HFH program began the following year and included disassembly of the aircraft to identify corrosion, cracks and fatigue-related issues.

Examiners and evaluators (E&E) perform the PMI-1 cycle, and determine the scope of repairs or replacement to the aircraft’s major components and other crucial parts. They also perform the HFH inspections, which are separate from the PMI-1inspections.

Results of SLAP phase two indicated that if the service life of the legacy Hornets were to be extended further — to 10,000 flight-hours — then significant improvements were required. To that end, the Service Life Extension Program (SLEP) was created in 2008.

Service Life Extension Program (SLEP)
The cornerstone to the SLEP is the basic HFH inspection and the Center Barrel Plus procedures that target fatigue issues of the A-D legacy Hornets.

In 2009, six procedural bulletins of SLEP were released and would permit an aircraft to exceed 8,000 flight hours, with a service life extension of 600 hours.

In 2011, the first revision to the HFH program, Revision A, added two more bulletins which increased the inspection locations from 83 to 126.

Areas inspected include a myriad of exterior and interior components including skins, formers, bulkheads and doors.

In addition to visual analysis, detailed non-destructive inspection methods are used to locate minuscule cracks, warping and separations within laminates.

Results of follow up inspections at 200, 400, and 600 flight-hour intervals are evaluated to determine 1,000 flight-hour extensions of aircraft.

In addition to fatigue cracks, many legacy Hornets suffer from corrosion; specifically in the doors of the vertical tail sections of the aircraft.

Fleet Readiness Center Southwest (FRCSW) formed an action team to not only handle corrosion damage, but to investigate ways to potentially prevent corrosion.

To augment its corrosion action team, FRCSW created a speed line about four years ago solely devoted toward HFH work. Aircraft inducted for PMI-1 typically undergo both procedures; while the maintenance schedule of other aircraft may be altered to accommodate the Center Barrel Plus procedure, as well.

Aerospace engineer Angela Crenshaw said that approximately 37 legacy A-D model Hornets are scheduled to be inducted for HFH inspection in 2018; and of those, 16 are slated for FRCSW.

When complete, FRCSW sends a Service Life Extension Authorization (SLEA) message to the respective squadron. The message relays the interim flight extension hours granted; usually 1,000 flight hours, and the next maintenance interval for the aircraft.

Crenshaw noted that an HFH program is also being developed for the F/A-18 Super Hornet E and F models.

“As part of the Service Life Modification (SLM) program, there will be a Super Hornet HFH inspection. The first aircraft is scheduled to be inducted in mid-2018,” she said.

“The inspection locations are based on results of E and F SLAP hot spot analysis. The inspection procedures are still being developed, but will be based on the SLAP results and not necessary be the same as A-D.”