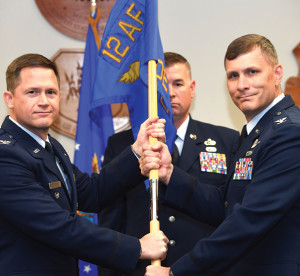 Since 1996, the MQ-1 Predator and MQ-9 Reaper enterprise has been engaged in continuous combat operations in multiple theaters around the world.

As the demand for remotely piloted aircraft support grew, so did the U.S. Air Force’s reconnaissance and attack capabilities.

“The PAROC standup is required due to the recognition that our RPA forces have been engaged in combat operations consistently for nearly two decades and have been embraced by the Total Force,” said Col. Mark Hoehn, 12th Air Force, Detachment 3, PAROC commander.

The change in command structure comes from the need to separate mission sets to enable affected commanders and their air components to be more proactive, effective and efficient in the use of MQ-1 Predator and MQ-9 Reaper.

“Clear distinctions between wartime and peacetime operations do not exist for UAS [RPA] platforms—the demand for UAS [RPA] will grow and persist well past the conclusion of the conflicts in Afghanistan and Iraq,” said Robert Gates, former Secretary of Defense, in a June 2011 address.

He continued to say, “the capabilities provided by MQ-9 and MQ-1 are among the Air Force’s primary contributions to the Nation’s defense, and I expect you to do everything to institutionalize them to the same degree as other significant Air Force capabilities.”

Twenty-one years after the first MQ-1 flight, the enterprise now has distinctive lines of guidance and communication to ensure its continued support for persistent attack and reconnaissance capabilities.

“The PAROC is a mission partner to the MQ-1 Predator and MQ-9 Reaper community so shifting these responsibilities to an independent unit, functionally organized for this scoped mission is simply the latest step forward,” said Hoehn.

As the PAROC transitions to full operational capability, there will be additional coordination for manning and infrastructure upgrades to ensure long-term stability.

The PAROC’s activation meets the Air Force’s strategic MQ-1 Predator and MQ-9 Reaper growth roadmap and is set to be fully operational by the end of fiscal year 2019.

“It’s tough to execute change, especially for something that has been around for a decade, but what I’ve seen in the RPA community and those that support us…is understanding. What we do 24/7/365 underpins the capabilities and success of our joint and coalition partners,” said Hoehn.

MQ-1 Predators and MQ-9 Reapers are among the highest capabilities requested by combatant commanders and fly a total of 60 combat lines daily in support of theater operations.

“No other wing is as fully engaged in combat operations on a daily basis, and the PAROC will help coordinate our conventional combat lines with the respective Combined Air Operations Centers,” said Col. Julian Cheater, 432nd Wing and 432nd Air Expeditionary Wing commander.

As the Air Force continues to normalize RPA operations, it is tasked to provide multi-intelligence, strike and force protection resources to all combatant commanders while addressing both current and evolving operational requirements.

“This community has adapted and grown…and adapted again, over the past decade,” said Hoehn. “That is part of what has made the MQ-1 Predator and MQ-9 Reaper enterprise so successful and this is another step in that evolution.”