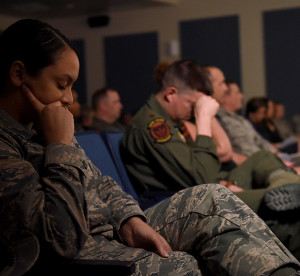 Tech. Sgt. Adam, 66th Rescue Squadron special missions aviator, asked audience members to close their eyes and allow themselves to experience his story as realistically as possible during a Storytellers event in the Creech auditorium, October 18, 2017. Adam began by describing what he could see, then moved to what he felt and finally shouted to the crowd the chaos that occurred over his headset.

It isn’t rare for Airmen, across the Air Force, to do more than what is expected; to help others when they can and to inspire positivity in those around them.

Sometimes, behind these actions, lies a story soaked in pain and washed in struggle.

On Oct. 18, 2017, in the dimly lit auditorium at Creech Air Force Base, four people gathered to recount their past to more than 100 of their peers and friends. They spoke of a helicopter crash, a battle with cancer and life after losing a brother. Each experience, deeply personal and life changing.

“What did the folks in World War I do at the end of the day,” asked Col. Ryan, 732nd Operations Group commander. “They saw tragedy, then they circled around and told their stories. It’s what connects us as humans.”

Storytellers, an Air Force sponsored event, is a place where Airmen can tell others of the obstacles they’ve overcome.  This can add to the healing of the speaker and also inform fellow Airmen that they are not alone.

“Being able to admit those things and, finally, say them out loud was huge for me and helped me focus my thoughts,” said Tech. Sgt. Adam, 66th Rescue Squadron special missions aviator. “Knowing that it could help somebody else, gives it that much more meaning.”

The first Storytellers was organized by several members of the Incirlik Air Base Toastmasters Club in response to the question posed by the former Chief Master Sgt. of the Air Force James Roy: “Every Airman has a story – what’s yours?”

“Who knows how long they’ve been living with that story and how long it’s been affecting them,” Adam said. “It’s important to connect with those people and make sure it’s not driving them down the wrong path.”

The speakers each reflected on their individual battles and admitted that they were difficult to move past. Yet, they chose to stand in front of dozens of Airmen and relive those memories.

“It’s hard being vulnerable,” said Staff Sgt. Janai, 42nd Attack Squadron commander’s support staff NCO in charge. “Having all those emotions and sharing something so personal. It’s just amazing to see how people can go through such terrible things in their life and still live through it.”

The words of the Storytellers had a profound effect on those in the auditorium. As some explained, their narration inspired tears, laughter and hope for many in the audience.

“I was recommended to come here today and I’m really glad I did,” said Airman 1st Class Jamie, 432nd Aircraft Maintenance Squadron in radio frequency transmissions. “I got to see how closely I related to the speakers. I cried a lot, I laughed too, I just really enjoyed it and I’d like to come out for the next Storytellers event.”

The speakers explained they had to put aside fears about talking about their past in front of an audience. However, they did so, not just to help themselves heal, but also to provide guidance for those who didn’t realize they needed it.

“For one, its therapeutic for them to share the story,” said Maj. Joel, 432nd Wing Chaplain. “Not only for their own resiliency, but for others… like those who have attended. People relate to those challenges and create strategies for when they may find themselves in situations like those they’ve heard.”

There are many definitions, to many people, of what it means to serve in the Air Force.  The speakers at this year’s event, revealed that although we are not the same, we share the same values of Airmanship.

“We’re all alike in some shape or form,” Janai said. “It doesn’t really matter who you are or who you work for, we’re people, and sometimes we need help. It’s okay to reach out.”