It is one of four locations run by the chapter and is the first on an Air Force installation in Nevada.

Volunteers hosted a barbecue to celebrate the event and USO representatives spoke about what the USO had to offer.

The center will provide a place for Creech Airmen and spouses to decompress by taking part in free snacks, beverages and entertainment. It has a large-screen TV, four gaming stations, a pool table and several other available amenities to increase morale.

“I think what we’re trying to do is figure out and develop a package of services that we can offer that will make the experience at Creech much more enjoyable for the people that serve,” said David Thorson, center director for USO Las Vegas.

The USO will only operate during the day for now, but representatives are looking into the possibility of extending the hours for the shift workers.

“We are looking for volunteers from the staff out there who can do one-hour shifts,” said Thorson. “We’d like to be able to provide services to the swing and midshifts, but we need the staff.” 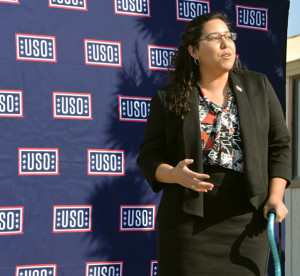 Several USO volunteers engaged Creech members who attended the USO grand opening and discussed what the new center has to offer at Creech Air Force Base, Nev., Oct. 12, 2017. USO workers contributed to the new location in a variety of ways such as interior design, raising funds or providing supplies for the location.

Thorson said he hopes the facility will be able to operate alongside Creech’s distinct mission sets.

The facility offers volunteer positions, not only for Creech members, but also to interested spouses. Those looking to volunteer are given flexible hours to choose from and have the choice to set up a reoccurring schedule.

To participate at the new Creech location, visit https://volunteers.uso.org to start the process.

Thorson said the opening allows for the USO to serve alongside Airmen who are conducting continuous operations.

“Creech is on the leading edge of 21st century warfare,” said Thorson. “Its unique mission and location gives the USO an opportunity to evolve our services to meet the needs of the Airmen serving.”