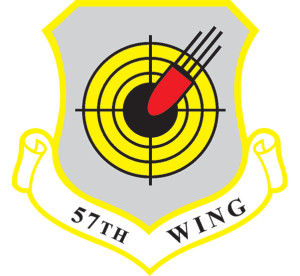 The 57th Wing, as the most diverse wing in the Air Force, provides advanced, realistic and multi-domain training focused on ensuring dominance through air, space and cyberspace.

United States Air Force Weapons School
Composed of 19 squadrons, the USAF Weapons School teaches graduate-level instructor courses that provide the world’s most advanced training in weapons and tactics employment to officers and enlisted specialists of the combat air forces and mobility air forces. Every six months, the school produces approximately 100 graduates who are expert instructors on weapons and weapons systems as well as air, space and cyberspace integration.

Students are fully qualified instructors, chosen by a central selection board, and among the top of their peers. During the course, they receive an average of 400 hours of graduate-level academics and participate in demanding combat training missions. The culmination of the course is Weapons School Integration, a four-week series of combat missions over the Nevada Test and Training Range, where students demonstrate their ability to manage battles of increasing complexity and effectively integrate multiple weapons systems. Upon graduation, the new weapons officers return to the field to serve as unit weapons and tactics officers, providing advanced instruction and battlefield guidance to their commanders, operations officers and personnel.

57th Operations Group educates, exercises, and advocates the integration of airpower into the joint fight and supports the preparation of the combat air forces’ maintainers and aircrews. To execute its mission, the 57th OG oversees operations of six squadrons and two detachments located at Nellis AFB and four geographically separated locations.

414th Combat Training Squadron conducts exercise Red Flag, a realistic multi-domain training exercise involving the air forces of the United States and its allies that maximizes the combat readiness and survivability of participants by providing a robust, realistic training environment. It is conducted on the vast Nevada Test and Training Range Complex.

6th Combat Training Squadron, in conjunction with its detachment at Fort Sill, Oklahoma, provides Air-Ground Warriors education and training in doctrine, concepts, tactics, techniques and procedures by which air and ground forces plan, request, coordinate, and control joint firepower on the battlefield.

177th Information Aggressor Squadron is an Air National Guard unit located at McConnell AFB, Kansas, that provides operational effects through adversarial replication for the state of Kansas, the Air Force, and the DOD by gaining persistent access and exploiting all forms of Cyber assets using network tactics, close access and intelligence analysis.

26th Space Aggressor Squadron is an associated Air Force Reserve unit that is collocated with the 527 SAS at Schriever Air Force Base, Colorado, which prepares Joint Forces and Coalition Partners to fight in and through contested space environments by analyzing, teaching and replicating realistic, relevant and integrated space threats.

57th Maintenance Group
The Air Force’s most complex maintenance group provides on- and off-equipment maintenance for over 140 assigned A-10, F-15C/E, F-16, F-22 and F-35 aircraft to support 10 flying programs, and all visiting Red Flag, Green Flag, and operational test and evaluation aircraft.

561st Joint Training Squadron hones the warfighter’s capability by providing timely tactical lessons learned and current tactics, techniques and procedures to ensure training results in increased readiness and lethality. It is the focal point for a flexible, responsive and real-time process that collects, vets, disseminates, and integrates relevant and timely information and is a central source for current tactical doctrine and tactical resources.

The U.S. Air Force Air Demonstration Squadron — Thunderbirds “America’s Ambassadors in Blue.” The Thunderbirds plan and present precision aerial maneuvers to exhibit the capabilities of modern high performance aircraft and the lofty degree of professional skill required to operate these aircraft in a precision aerial demonstration. Team members carry out their unique mission as a special salute to their brothers and sisters in arms who are fighting America’s battles in air, space, and cyberspace. They have performed for more than 300 million people in all 50 states and many countries around the world.

From mid-March through mid-November each year, the Thunderbirds are on the road, planning and presenting precision aerial demonstrations in one of America’s front-line multi-role fighter aircraft, the F-16 Fighting Falcon. Objectives of the squadron are to demonstrate to the public the professional competence of Air Force members, to support Air Force community relations and people-to-people programs and to support Air Force recruiting and retention programs. For more information, see the Thunderbirds Fact Sheet or visit their website.