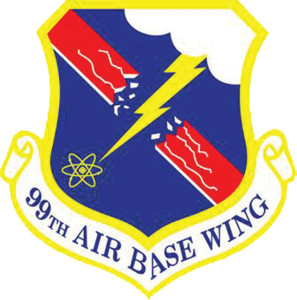 Mission
The 99th Air Base Wing, activated in October 1995, is the host wing for Nellis and Creech Air Force Bases located in Southern Nevada.
The wing provides installation support for more than 14,000 personnel assigned to Nellis AFB, Creech AFB, and the Nevada Test & Training Range. Three groups are assigned to the wing: 99th Mission Support Group, 99th Medical Group and the 799th Air Base Group.

• The 99th Comptroller Squadron is assigned directly to the wing and provides financial advice supporting Nellis AFB’s peacetime and war-fighting missions through managing an operations and maintenance budget of $565 million and providing financial services assistance to assigned members.

• The 99th Contracting Squadron executes acquisition strategy at Nellis, Creech, and the NTTR, serving as business advisers to senior leadership and mission partners, and administers the contract performance management program.

• The 99th Surgical Operations Squadron deploys surgical and support capabilities to the area of responsibility. Maintain skills and currency at home by providing care for DOD and VA beneficiaries.

The 799th Air Base Group is comprised of two squadrons that enable success through innovative base support and training for Creech Air Force Base personnel and mission.

Background
The 99th Air Base Wing traces its lineage to the 99th Bombardment Group activated on June 1, 1942, without personnel or equipment at Orlando Army Air Base, Florida. It quickly transferred to Gowen Field, Idaho, where it received its initial manning. After several more moves for training, the group, flying the B-17 Flying Fortress, distinguished itself while flying bombing missions beginning in May 1943 from Algeria against targets in Sardinia and, Sicily, Italy. In December 1943, the group moved to Italy, flying a total of 395 combat missions throughout Europe before inactivating in November 1945.

It was reactivated at Ellsworth AFB, South Dakota, in 1989 as the 99th Strategic Weapons Wing. Several reorganizations and name changes occurred until September 1995, when it was inactivated and moved to Nellis AFB, where it was re-designated and activated as the 99th Air Base Wing on Oct. 1, 1995.