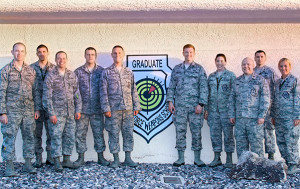 Participants of the U.S. Air Force Weapons School’s first Offensive Cyber Operations-6 mission, spearheaded by the 328th Weapons Squadron at Nellis Air Force Base, Nev., pose for a group photo Nov. 1, 2017. OCO-6 is designed to accelerate teamwork and communication among squadrons prior to the Weapons School Integration phase.

The U.S. Air Force Weapons School’s Cyberspace Warfare Operations Weapons Instructor Course, under the 328th Weapon Squadron at Nellis Air Force Base, Nev., may have had its start just five years ago, but the cadre is wasting no time in innovating its curriculum to advance tactics and accelerate development of future leaders.

In OCO-6, cyber students must integrate live with other Weapons School WICs to plan, execute and debrief a tactical mission. In prior classes, the 328th WPS cadre had identified a need for faster cohesion with other WICs. They designed OCO-6 to foster communication and strengthen teamwork before students reach the Weapons School’s complex capstone missions, known as Weapons School Integration.

“When I was a student in 2012, we didn’t execute with other WICs until WSINT,” said Major Andre Wolf, 328th WPS director of operations. “But, as we’ve sent Weapons School graduates back into the field and then cycled them back as instructors, and as the cyber community has matured, we realized we need to execute live components earlier in the course.”

Integrating with the 14th WPS (U-28A WIC), 19th WPS (Intel WIC and Advanced Enlisted Mission Planning Course) and 26th WPS (MQ-9 WIC) during Class 17B, CWO WIC students had to pair assets and capabilities against approved targets based on the joint force air component commander’s intent. The students’ plan encompassed multiple domains in a contested environment. Together, students from the various WICs planned, executed and debriefed the mission.

The face-to-face interaction between the participating weapons squadrons gave instructors more latitude in designing problem sets and provided students with ways to multiply the capabilities they had at their disposal to solve challenges, said Captain Stephanie Travis, 328th WPS flight commander of cyber integration.

“The ability to get these communities in a room and focused on working together helps ease the transition into WSINT as well as increases their abilities to solve the hard problems after graduation,” added Travis.

“It’s pretty significant for us, as non-kinetic players, to have the actual students and instructors teach us about employment considerations for their capabilities,” said Wolf. “It helps us understand each other.”

Although OCO-6 mission planning had its challenges, such as the 14th WPS being geographically separated from the other squadrons, Travis said the benefits of incorporating the U-28A and the MQ-9 with cyber and intel forces made it all worthwhile as the cadre watched their students grow and learn from each other.

“With this being the first time [integrating the 14th WPS and 26th WPS], I was not entirely sure what to expect, but I knew it would open up a lot of awesome learning and opportunities,” said Travis. “The learning exchange that occurred was better than I expected. I am really happy with the outcome of the mission.”

“Communication is the first thing to break down, and this is our opportunity to establish relationships that will help tighten up communication earlier in the course than we have ever done before,” said Wolf. “The impact of OCO-6 is that our students now have a wider aperture on understanding Air Force capabilities. They realize that the planning concepts they learn in the CWO WIC are not unique to us. These concepts are ubiquitous across the Weapons School.”