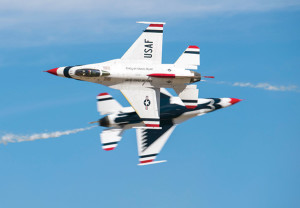 Thousands of people descended on Nellis Air Force Base, Nev., Nov. 11-12 for a chance to see the U.S. Air Force in action.

The visitors were attending the annual Aviation Nation Air and Space Expo. The annual air show is also the final show of the season for the U.S. Air Force Thunderbirds who are based at Nellis.

While the Thunderbirds are the headline demonstration — the crowds were thrilled with aerial displays of many Air Force aircraft, as well as static displays, NASA exhibits and a STEM expo.

“Thank you for joining us this year as we celebrate the Air Force’s 70th birthday with theme American Airmen: Breaking Barriers since 1947,” said Maj. Gen. Peter E. Gersten, commander of the U.S. Air Force Warfare Center at Nellis. “Today, the Airmen of Nellis and Creech continue to break barriers with the amazing tradition of sharpening America’s war fighting edge.

“As a guest at the Air Combat Command’s closing celebration of the Air Force’s 70th Birthday, you will get to experience exciting aerial and ground performances, an array of static displays from both past and present, and have the chance to interact with the Airmen who carry out the Nellis, Creech and the 2.9 million-acre Nevada Test and Training Range missions,” Gersten continued.

Aircraft on display ran the gamut from the Air Force’s most modern — the F-22 Raptor and the F-35 Lightning II — to the warbirds of yesteryear — the B-25 Mitchell and World War II aircraft from the Texas Legends.

And the response from the public was overwhelmingly positive.

“I took my son and he wouldn’t stop thanking me for taking him,” said Paulina Gonzalez on Facebook. “He loved it and so did I.”

Freddy Centeno also commented on Facebook saying it was “the best air show in the world,” and he “loved the combat simulation.”

And while the 2017 show is over, Nellis is asking attendees to take an online survey so they can find ways to improve the visitor experience for next year.

The survey is available at https://www.surveymonkey.com/r/AviationNation2017.