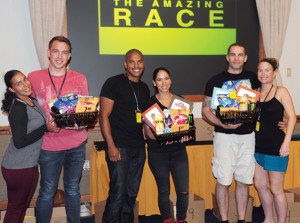 Couples who participated in a Nellis Air Force Base, Nev. chapel-sponsored marriage enrichment event pose after completing a sporting activity, Oct, 27, 2017. The marriage enrichment seminar was followed by an “Amazing Race”-style activity, which had couples racing against each other in various events.

In an effort to strengthen marriages and have some fun, the base chapel recently hosted a marriage enrichment event for couples on Nellis Air Force Base, Nev.

“Military life can sometimes be tough on marriages and so we want to do whatever we can to help strengthen and support our Airmen and their families,” said Chaplain (Capt.) Chaplain Gilleland, 99th Air Base Wing.

The event began at the Oasis Club where couples enjoyed breakfast while learning valuable marriage enrichment principles from the book Seven Principles for Making Your Marriage Work, by Dr. John Gottman.

Gottman based his principles on more than 30 years of scientific research and observations of married couples and formulated a guide toward cultivating harmonious and long-lasting relationships.

The enrichment seminar was followed by an “Amazing Race”-style activity, which had couples racing against each other, going from one location to another on base, solving puzzles and completing tasks.

The couples had to work together using their individual strengths to complete the tasks, which varied from solving mental puzzles to physical tasks like shooting free throw baskets. Points were awarded for all successfully completed tasks, several of which were aimed at helping the couples put into practice the principles they had learned earlier in the day during the first part of the event.

Each couple was given two hours to complete the race. Prizes were given to first, second and third place teams. Prizes included commissary gift cards and several other donated gifts from outdoor recreation, Papa John’s Pizza, Sunrise Vista Golf Course, the Base Exchange, and Information, Tickets and Travel. At the end of the day, one couple emerged victorious.

After a very competitive event, the first place winners were Staff Sgt. Marcel LeDuff, 57th Aircraft Maintenance Squadron and his wife, Vynnie. They edged out other teams during the fun-filled afternoon.

“The wife and I won the Amazing Race for spouses — it was the best event we have done on the base thus far,” said Marcel. “What a great time!”

If couples are interested in participating in the next Amazing Race event, email Gilleland at Jason.gilleland@us.af.mil.

Hanukkah … Kindling of the Menorah