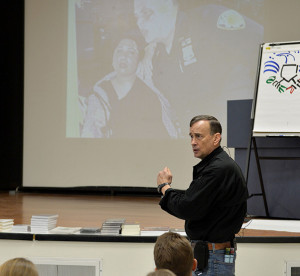 Retired Lt. Dave Col. Grossman refers to a photograph taken during the 9/11 terrorist attack to express what stress does to the human body Nov. 13, 2017, at Creech Air Force Base, Nev. Grossman is a public speaker who focuses on the effects of combat and living a life of sacrifice.

Grossman, a former U.S. Military Academy West Point Psychology professor and the director of the Warrior Science Group, has researched the psychological cost of military service and the war on terrorism and now uses that knowledge to educate service members, law enforcement professionals and university students across the U.S.

The four-hour seminar covered topics such as the importance of mental fitness, the effects the fight against terrorism has on military members and why each Airman is necessary to accomplish the Air Force mission.

“Our current enemies cannot be deterred,” said Grossman. “They can only be hunted down around the planet and stopped. Every day they don’t attack us is a victory.”

The 432nd Wing/432nd Air Expeditionary Wing commander expanded on the significance of Grossman’s message that although Airmen involved in remotely piloted aircraft operations sometimes struggle with striking the balance between home and work life, they must find outlets to help manage these issues.

“I’ve read his books in the past and they are extremely applicable to what we do at the 432nd Wing,” said Col. Julian Cheater. “When you have a wing that is part of combat operations every single day, it’s important to take time to reflect, to see how we can do it better and how we can better sustain ourselves. Lt. Col. Grossman has given us great insight into that.” 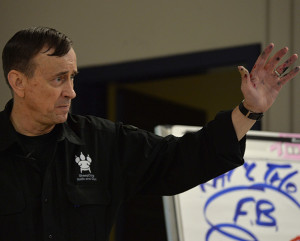 Retired Lt. Col. Dave Grossman explains to the audience some of the obstacles he and his wife have overcome after military service Nov. 13, 2017, at Creech Air Force Base, Nev. Grossman, a public speaker, visited team Creech to discuss mental fitness, the war on terrorism and each Airman’s importance to the Air Force mission.

One recurring theme was resiliency and how it can be built upon by finding what motivates a person. Grossman identified that for many people, their children can be the greatest motivation.

He referenced multiple works during his lecture and encourages those seeking enlightenment on issues plaguing society to intentionally educate themselves rather than depend on unreliable sources.

Grossman later commended the Airmen who fly, maintain and support the combat MQ-1 Predator and MQ-9 Reaper enterprise for their relentless dedication to delivering justice.

Audience members were welcomed to the stage where many expressed how grateful they were to hear him speak. 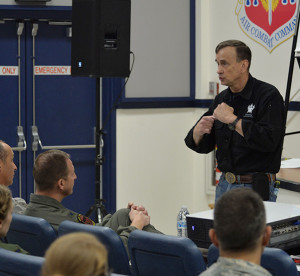 Retired Lt. Col. Dave Grossman elaborates on the effects that post-traumatic stress disorder can have on military members and their families Nov. 13, 2017, at Creech Air Force Base, Nev. Grossman is a public speaker and former professor who shares his psychological research with service members, law enforcement professionals and university students across the U.S.

“I enjoyed getting the opportunity to listen to Lt. Col. Grossman speak,” said Staff Sgt. DelAngel, 489th Attack Squadron commander’s support staff NCO in charge. “Not only was he very inspirational and knowledgeable, but he was entertaining as well. He really kept the audience alive.”

As an author, public speaker and former professor, Grossman has dedicated the past 20 years of his life travelling the nation to develop stronger minds, while motivating and inspiring people with his research and personal revelations.

“Sometimes the greatest love is not to sacrifice your life, but to live a life of sacrifice,” Grossman said. “Believe in who you are, believe in what you do because our nation has never needed you like we need you now.”