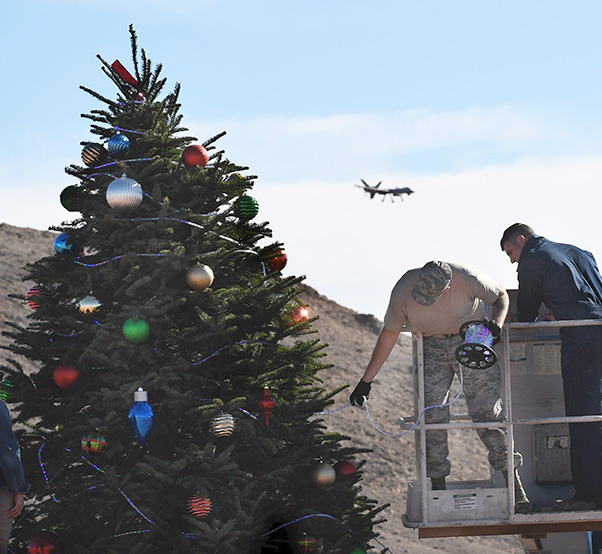 Two Creech Air Force Base members decorate a Christmas tree Dec. 2, 2017, at Creech AFB, Nev. Diamond Resorts International donated the tree and decorations as a thank you to Creech service members and their families.

Creech Air Force Base, Nev., Hunters and Diamondbacks were surprised to see a real Christmas tree standing nearly 20 feet tall and positioned in front of the 432nd Wing building Nov. 30, 2017.

Many members took immediate notice of the base’s new tree, loaded with colorful lights and vibrant decorations which contrast the surrounding brown, beige and grays of Nevada mountains, desert sands and highway tumbleweeds.

“I noticed the tree while I was on patrol when they were putting it up and again when they were decorating it,” said Airman Trent Osier, 799th Security Forces Squadron member. “It boosts the morale and holiday spirit of the base because it shows that the people in our community care.”

Diamond Resorts International, the organization that donated the tree, also donated toys for the Creech Children’s Holiday Party held on Dec. 2, and came out to celebrate the day with members and their families. 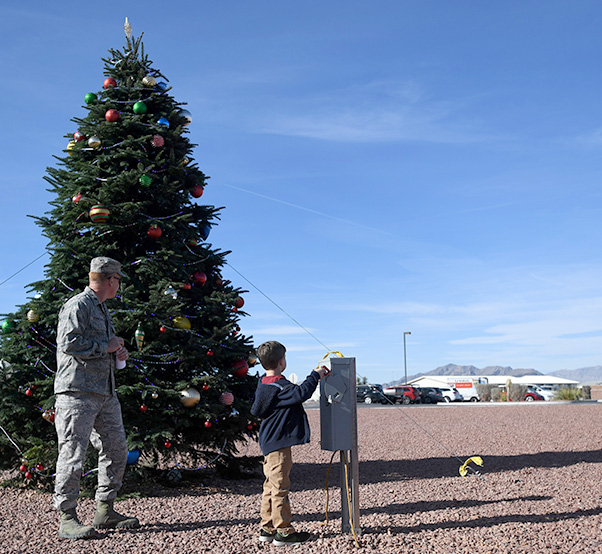 A child turns the Christmas tree lights on during the first tree-lighting ceremony Dec. 2, 2017, at Creech Air Force Base, Nev. The tree stands almost 20 feet tall and is the base’s first live Christmas tree.

“We just wanted to wish you very happy holidays and we are thrilled to be a part of your family,” said Keri Serrano, Diamond Resorts International human relations director. “We’re very excited to not only help with the tree, but also to be involved in the holiday party. We have about 3,000 [people] in Las Vegas and all of them have been helping with this.”

“This is the first time we’ve had a Christmas tree at the 432nd Wing,” said Col. Julian Cheater, 432nd Wing/432nd Air Expeditionary Wing commander. He then gave thanks to Serrano and her team and expressed his amazement at the local community’s support for the Hunter and Diamondback family.

Maj. Joel, 432nd WG Chaplain, chose one lucky child that attended the event to be the first to “flip the switch” and turn on the lights as Cheater led the crowd in a countdown “…3…2…1!”

The base will continue working with the community and hopes to make this a Creech tradition for years to come. 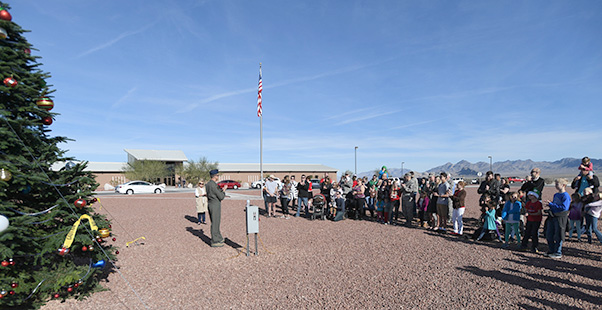 Col. Julian Cheater, 432nd Wing/432nd Air Expeditionary Wing commander, delivers remarks before a tree-lighting ceremony Dec. 2, 2017, at Creech Air Force Base, Nev. Diamond Resorts International donated the tree, as well as toys for the Creech Children’s Holiday Party Dec. 2, and came out to celebrate with members and their families. 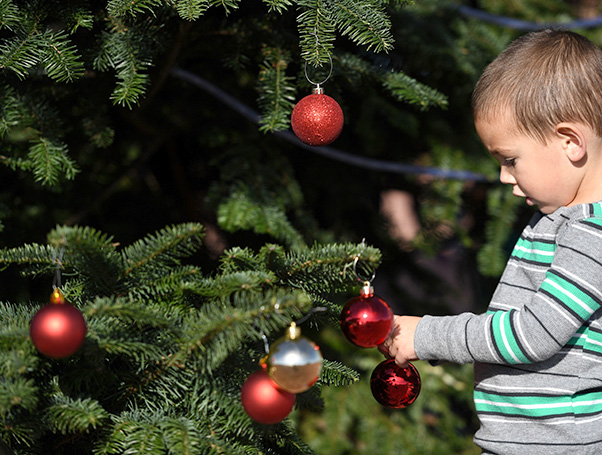