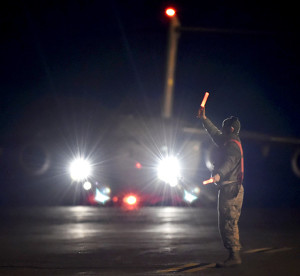 Airman 1st Class Kevin Schreiber, 437th Aircraft Maintenance Squadron crew chief, marshals a C-17 Globemaster III during a Joint Forcible Entry training event in support of the U.S. Air Force Weapons School Integration phase on a range near Nellis Air Force Base, Nev , Dec. 9, 2017. Thirty seven C-17 Globemaster IIIs, 21 C-130 Hercules and 120 Army paratroopers participated in the mobility portion of the WSINT phase during a simulated mass JFE event over a contested target. The event is designed to teach Airmen how to get safely to their target and direct airpower and follow-on forces to that target.

The U.S. Air Force Weapons School at Nellis Air Force Base, Nev., trains tactical experts and leaders to control and exploit air, space and cyberspace on behalf of the joint force. Aircrew members from Joint Base Charleston participated in the JFE, allowing for the chance to integrate with more than 100 dissimilar aircraft.

“A JFE is one of the most complex mission sets we, the Mobility Air Forces, participate in,” said Capt. Tom Sallenger, 15th Airlift Squadron, 437th Operations Group commander’s action group. “The ultimate goal of a JFE is to support the Army and establish a lodgment in someone else’s air space. Our purpose for the JFE is to deliver the Army to an objective area to establish a U.S. presence. As part of the joint overall picture, we require support from the Combat Air Forces to get us into contested air space.”

Mobility Air Forces aircraft, launching from 12 bases, participated in the capstone event, with an objective to deliver 120 Army paratroopers to a target area.

“We flew in with 37 C-17s and 21 C-130 Hercules, pressed into contested air space, and fought our way in,” said Maj. J.R. Wendler, 16th Airlift Squadron and 437th Operations Group director of staff. “It requires a lot of integration with other assets, F-16s (Fighting Falcon), and F-15s (Eagle) for example, to clear the lane for the MAF to get to the objective area, air drop and put in our joint partners, in this case the Army, to start building up combat power.”

The scale of the event provided a realistic training experience. Sallenger said the size and realism of the JFE is necessary to prepare aircrew members for real world operations. 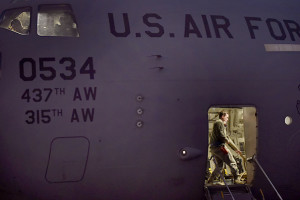 “The reason why we are providing so much support as Air Mobility Command and as the MAF is because we’re preparing for the future which requires readiness,” said Sallenger. “In planning a contingency operation, we need to have real-life experiences and some of those experiences can only be obtained in a scenario as in-depth as the JFE.”

Although the MAF completed the phase effectively, support elements ensured success. Sallenger said the accomplishment of events like these start at the ground level.

“It really goes way deeper and involves support agencies across Joint Base Charleston, including our maintainers,” said Sallenger. “They worked 12-hour shifts and generated the aircraft to make sure we met our minimum force to deliver the Army. Without them, none of this would be possible. They put in the sweat to make this happen and it’s really where the rubber meets the road.”

“It takes a lot of manpower and a lot of people being dedicated, especially in weather like this, cold and rainy, to being out there for hours on end,” said Sutter. “It’s intimidating at first because it is a huge project and very visible. However, these are the same steps and same processes we go through for a real world event. So, if we need to clear off this flightline and get all these aircraft out of here, it’s the same steps. It’s important for us to do it and do it right.” 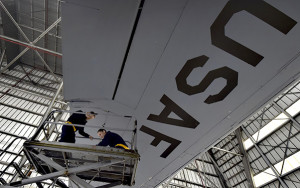 Every six months, the Weapons School graduates approximately 100 Weapons Officers and enlisted specialists who are tactical system experts, weapons instructors and leaders of Airmen. JB Charleston, as part of the MAF, demonstrated an ability to integrate with the CAF and joint partners during the JFE event and helped build a realistic experience for the future Weapons Officers involved.

“Over the past several decades the Weapons School has evolved from being Air Force fighter pilot centric to involving the MAF, which involves airlift and tanker support. Now it’s starting to branch into a more joint Weapons School environment which involves the Army, Navy, and Marine Corps, and all the assets they bring to the fight,” said Sallenger. “The lessons we learn from participating in a JFE allow us to work as a total force and achieve combined objectives.”