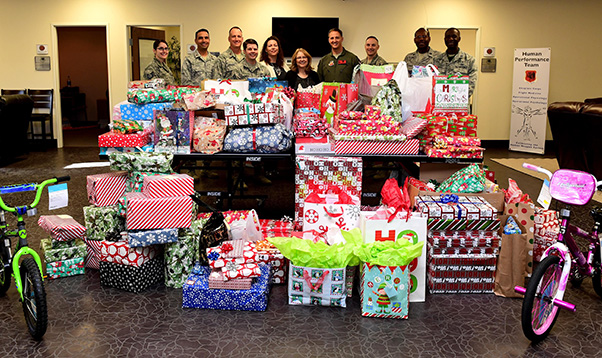 Units from around the 432nd Wing/432nd Air Expeditionary Wing and the 799th Air Base Group volunteered to aid families by donating Christmas gifts up to $50 based on the children’s wish lists.

The base has partnered with Indian Springs for more than five years on this endeavor.

“It’s a great experience every year,” said Staff Sgt. Zachary, 432nd Wing chaplain’s assistant. “It’s important to give back to the community and especially to make a difference in these kids’ lives.”

The Wing chapel took the lead for organizing the events and delegated family sponsorship to units across the base. Getting everyone involved allowed Creech to provide gifts for more than 30 families in Indian Springs.

“This means everything to the kids,” said Kimberly Guerino, registrar for Indian Springs’ schools. “Many of the families who receive these gifts don’t have anything to give their children. This is their Christmas and these gifts are what go under their tree.”

On Dec. 23, 2017, the Indian Springs community will come together to collect their gifts and celebrate the holidays.

Guerino added that the kids look forward to this event every year and are thankful for such generosity.