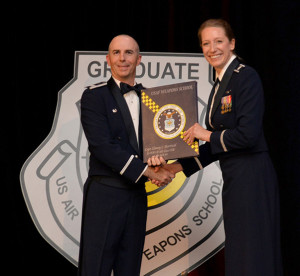 Capt. Clancy Morrical, 480th Fighter Squadron instructor pilot assigned to Spangdahlem Air Base, Germany, credited windows of opportunity that opened when her tactical and leadership skills were ready for the challenge.

Attending the USAFWS is not a decision to make lightly. The school produces doctorate-level tactical experts and leaders for the joint force, requiring students to demonstrate dedication and perseverance throughout a rigorous six-month course.

“It’s timing,” Morrical said. “I’ve met so many wonderful women and men in the F-16 community who are certainly very qualified to come to the weapons school, but they have other priorities in their lives, professionally and personally.”

Lt. Col. Hugh Walker, 16th WPS commander, said he noticed Morrical’s outstanding capabilities and leadership skills while he was at Spangdahlem AB in 2015. He knew immediately it would not be long before Morrical was selected for the weapons school.

“I walked into the mission planning room, and she had the entire mission planning cell around the table,” said Walker. “She was giving direction, delegating tasks, and leading a group of 30 men and women. You don’t see that out of young pilots and mission commanders very often.

“I talked with her commander at the time and explained to him that she was an impressive instructor pilot,” Walker continued. “He then corrected me because she was only a young flight lead. Pretty incredible!”

Morrical’s decision to attend the USAFWS was grounded in her passion for education and her parents’ military service with the U.S. Army. With a bachelor’s degree in education, she chose to become an instructor pilot with the U.S. Air Force, rather than teach in the private sector. Attending weapons school was the next logical step in honing her teaching skills as well as an opportunity to integrate with other squadrons and platforms.

“The 16th WPS started working with the intelligence and air battle manager squadrons right away,” said Morrical. “It was surprising in a positive way to have the opportunity to get to know and work with those units. Other than in a Red Flag exercise, we don’t get to work with them that closely to see that we’re all working hard to achieve the same goal.”

The weapons school’s pace challenges students to manage their time wisely and learn quickly from the instructors’ constructive feedback, which focuses on areas for improvement. This allows students to stay on track with the course’s dynamic timeline of complex missions.

“It can be a challenge to stay positive,” said Morrical. “You’re under a microscope the entire time — you get a lot of immediate feedback.”
Walker described Morrical as having an incredible mix of intensity and approachability, and said she will have an incredible impact in the F-16 and the U.S. Air Force.

“She is meticulous,” Walker explained. “It is kind of incredible. Everything is always structured and in order, and every detail is accounted for in planning, execution and debrief. Everything has a purpose. I hope she teaches more folks to be that way.”

Now that Morrical is a weapons school graduate, she intends to help others in the same way.

“First, I’d have an honest conversation with [people who want to attend] and find out why they want to go to weapons school,” said Morrical. “They need to have their purpose clearly in mind because it will not be the easiest thing they’ve ever done. Then, I’d tell them the flying experiences will be the best they’ll probably ever have in their careers, and the instruction will be second to none.”