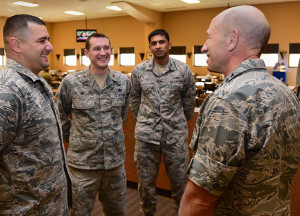 Gen. Mike Holmes, commander of Air Combat Command, speaks to Airmen selected as superior performers during his visit to Creech Air Force Base, Nev., Jan. 6, 2018. Holmes visited the Airmen of the 432nd Wing/432nd Air Expeditionary Wing to view Remotely Piloted Aircraft operations firsthand and to discuss the future of the enterprise.

Holmes and Batten met with Creech leadership to discuss future installation and mission opportunities. They also toured operational squadrons to greet the Airmen of the 432nd Wing/432nd Air Expeditionary Wing and see them perform their critical mission.

During the visit, Holmes addressed his priorities for the new year and also explained how instrumental the men and women of the Remotely Piloted Aircraft community are, especially within the ACC fleet.

“You can make the case that our new strategy in Iraq was based on working by, with and through coalition forces in Iraq and Syria and we leveraged that by using American airpower with help from some of our allies,” Holmes said. “At the heart of that airpower was our RPA enterprise. They are there all the time, long duration and long dwell keeping their eyes on enemies we’re trying to find and supporting coalition ground forces that in a lot of cases are not comfortable moving forward without a Creech flown asset keeping an eye on them.”

He also provided an update on the progress of the current Cultural Process Improvement Plan and how it will continue to make an impact to improve the quality of life across the RPA enterprise.

“We finished the environmental impact statement at Shaw which will allow the Secretary of the Air Force to declare it as a formal location for ‘Base X’ for the [RPA] group” Holmes said. “She’s also selected Tyndall AFB as the preferred alternative for ‘Base Y’.  In a few years we will have another wing, in addition to the one here at Creech, so we will have three places for Airmen in the RPA community to be stationed. Overall we’re following through on the CPIP actions, and you can see some good things happening.”

Holmes added that ACC is addressing manning for pilots, sensor operators and maintainers which will help enable time for dwell and career opportunities across the community.

“We built this enterprise as a test on short notice and added more and more over time, what we’re doing now is transitioning it into a sustainable career field,” Holmes said. “  We want to make it a job like the rest of the jobs in the Air Force where you have a career path, and multiple places to serve.  We want this to be a place where Airmen and their families cannot just survive doing this important mission, but thrive and make it a career.”

Holmes also recognized several top performers around the Wing for their professionalism, precision and persistence in delivering justice to the nation’s enemies.

“This base is famous for having Airmen who find new ideas and better ways to do things to save money and get [the mission] done faster,” Holmes said.
Holmes assured the community they have continued to impress him by providing dominant persistent attack and reconnaissance and taking the fight to the enemy 24/7/365.

“The Airmen at Creech have continued to do this job because they can see every day the impact they are having on the battlefield,” said Holmes. “Air Force leaders know that you are here every day, that you are here around the clock, and the ‘Hunters’ will continue to deliver justice.”