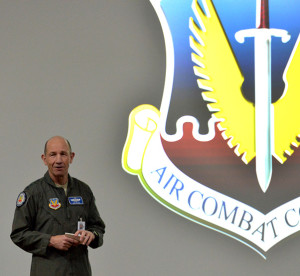 Gen. Mike Holmes, commander of Air Combat Command present a keynote speech during the Combat Air Force Weapons and Tactics Conference, at Nellis Air Force Base, Nev., Jan. 11, 2018. WEPTAC is an annual two-week conference to bring together warfighters from Combat Air Forces to discuss current issues, to look at future issues and to provide solutions for joint and coalition air forces.

Senior leaders provided their operational to strategic perspective through the keynote address and MAJCOM Director of Operations, (A3) briefs.

“The reasons you’re here is to learn from one another and think of ways to integrate airpower across all domains,” said Gen. Mike Holmes, commander of Air Combat Command. “It’s a challenge, there is a lot of work you’ve already done and we’re going to talk about the world we live in, how it’s changing and how we fit into it.”

This year’s theme of Developing Multiple Domain Tactics to Support Air Ops examined how the domains of cyber, space, land, maritime and the electromagnetic spectrum can better support air operations.

“Our job is to gather the required subject matter experts to facilitate multiple domain tactical discussions to answer the most difficult problems for our operational level leaders,” said Maj. Robert Bird, WEPTAC chairman. “WEPTAC also enables additional events including the (Command and Control) Summit, the Air Warfare Center Day, and multiple sidebars where experts from different fields discuss future improvements in and between their areas of expertise.” 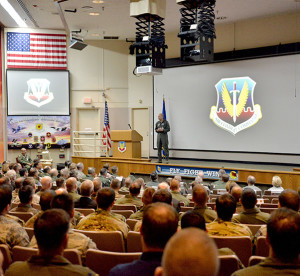 During the second week, participants transitioned into the Tactics Review Board. The Board gathers Tactics Improvement Proposals from 29 Mission Design Series platforms organized under the five ACC Core Function Teams and the Nuclear Deterrence Operations CFT from Air Force Global Strike Command.

Finally, the tactical leaders presented briefings that offer tactical solutions they developed in their Mission Area Work Groups to an audience of general officers and senior executive services personnel from the Air Force, joint and coalition communities, including the Chief of Staff of the Air Force.

“The world is changing faster than we’ve been able to keep up with as a bureaucracy.  We are coming to an end of a 30-year dominance where as a U.S. military we could go anywhere, attempt to do anything and have a debate about the lasting power of military force,” said Gen. Holmes.  “There are rising threats, behind those threats are smart, tough and motivating people like you that are fighting and stretching every day to try and to find an advantage and a way for us to win.”

General Holmes emphasized the Air Force has many challenges of aging hardware, twentieth century processes on replacing the hardware and changing the mindset on how we fight.

Bringing tactical experts together to focus on how to incorporate joint and coalition capabilities and challenges are the ultimate goals of WEPTAC to help combatant commanders effectively achieve air superiority objectives in the future.