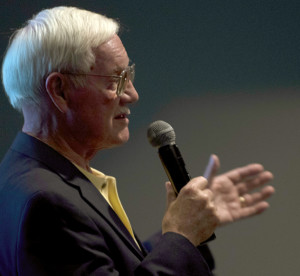 Retired Col. Edward L. Hubbard speaks at Red Flag 18-1 Flag Friday at The Club on Nellis Air Force Base, Nev., Feb. 9, 2018. Hubbard is an internationally known speaker, author and photographer and is dedicated to helping others by sharing his experience as a prisoner of war in Vietnam.

Red Flag 18-1 paused flying operations Feb. 9, 2018, to strengthen camaraderie between the U.S. and coalition combat air forces through a day of briefings and educational engagement at Nellis Air Force Base, Nev.

The units that travelled to Nellis from across the globe to train used the day’s events to build war fighter culture across multiple domains, platforms and nations.

Among the guest speakers for the evening was retired Col. Edward L. Hubbard, a prisoner of war in North Vietnam, who focused on the importance of developing relationships to cross-utilize potential resources. 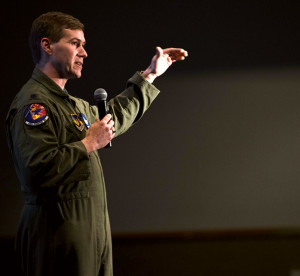 “Teamwork is the most underrated, underutilized resource in America,” said Hubbard. “We have available resources all day, every day, and we don’t know how to use them. Until we understand that and the value of influence, we’re never going to accomplish anything.”

This event marked the second time Flag Friday has occurred during Red Flag and, with continued success of the day, it will not be the last.

VASNHS prepares for flu season, encourages vets to get vaccinated