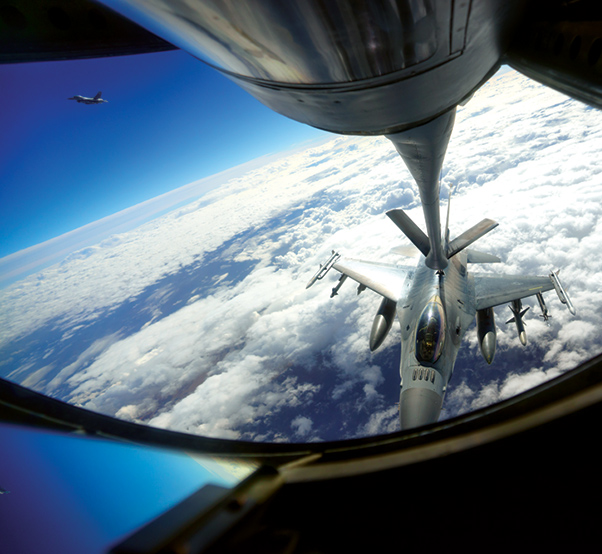 Two F-16 Fighting Falcons receive fuel from a KC-135 Stratotanker above the Nevada Test and Training Range, Feb. 14, 2018. The aircraft were participating in Red Flag-Nellis 18-1, which stresses combat readiness capabilities and interoperability between coalition partners from the Royal Air Force and Royal Australian Air Force.

The RFTTF consists of personnel, aircraft and equipment from McConnell Air Force Base, Kansas, Fairchild AFB, Wash., and Royal Air Force Mildenhall in England. The task force provided air refueling capabilities and airlift support throughout the exercise, which concluded Feb. 16.

“Tankers are critical to achieving success at Red Flag,” said Col. Richard Dickens, Red Flag 18-1 Air Expeditionary Wing commander and 4th Operations Group commander at Seymour Johnson AFB, N.C. “We are facing scenarios for an extended period of time, and without air refueling, we wouldn’t have the endurance to continue our mission.” 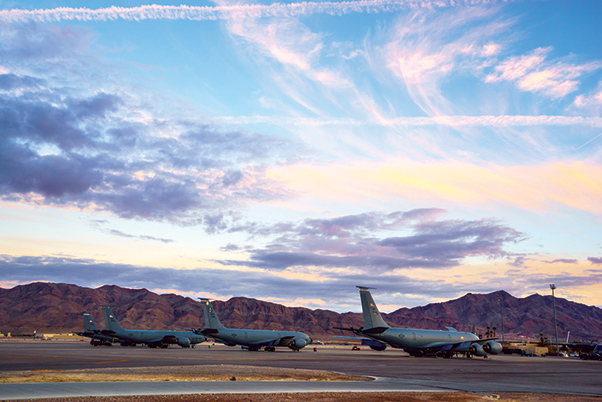 Four KC-135 Stratotankers deployed to Nellis Air Force Base, Nev., receive routine maintenance following the day’s missions during Red Flag-Nellis 18-1, Feb. 13, 2018. The Red Flag Tanker Task Force consists of aircrews, maintainers, intelligence personnel and all the equipment required to support the four aircraft for the duration of the exercise.

The RFTTF supplies fuel to fighter and bomber assets practicing a variety of maneuvers over the Nevada Test and Training Range during day and night operations. Tanker capabilities extend the range and the amount of time these assets can remain on the range.

“If we don’t have the gas, then these people don’t have full time to play,” said Maj. Brad Ragan, RFTTF Detachment commander.

The RFTTF launched more than 40 air refueling missions in the first two weeks of Red Flag. Each sortie supplied an average of 64,000 pounds of fuel to coalition aircraft training and operating in the simulated combat environment.

“We’re here to maximize everyone else’s effects,” according to a briefing from RFTTF Intelligence Tactics Team. “It’s about the effects we are trying to produce. That is the point of Red Flag.”